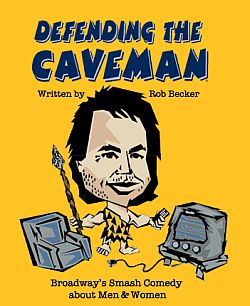 Note: Now Playing at D Las Vegas
Defending the Caveman is the new one-man show playing inside the showroom at the Golden Nugget Hotel & Casino. It is an adventure into the relationships of men and women, and especially the difference between the two sexes. Kevin Burke does a masterful job at relating this information in an easy and comfortable style. Couples seeing the show will be able to laugh at themselves and each other with a sense of camaraderie.

"Defending the Caveman" is the longest running solo play in Broadway history and has played in thirty countries and has been translated into fifteen different languages. Written by Rob Becker over a three-year period, the play has great insights into the common themes of relationships. It is a play about the ways in which men and women relate.

On a set that looks like something from the Flintstones, Kevin Burke relates these insights into modern relationships from the stand point that we are still instinctually bound to the tendencies we had when we were all cavepeople...men are the hunters, and women are the gatherers. A singular focus verses a broader awareness to color, smell, shape, etc. The comparison gets quite extensive and seems to permeate every aspect of relationships today...generally causing tremendous misunderstandings. It is easy to see why this production has built a loyal following in the therapeutic community, and is often recommended by psychologists and counselors.

It is not especially an evening filled with belly laughs, but rather acknowledgements with chuckles, knowing nods, and playful nudges. It oftentimes feels like an anthropology/psychology/sociology lecture, but it would have been one of those college lectures that was done by your favorite professor. It is light and fun, and generally right on the money. It is a very enjoyable evening and worthy of anyone's time.

The Golden Nugget has made an interesting choice with this production. It certainly gives us a different entertainment genre than we are used to here in Vegas. I am hoping that it does well. A greater variety of productions should serve us well, but it is generally up to the tourists to decide whether a show does well or not. I hope they can generate the audiences they need to keep this one going.