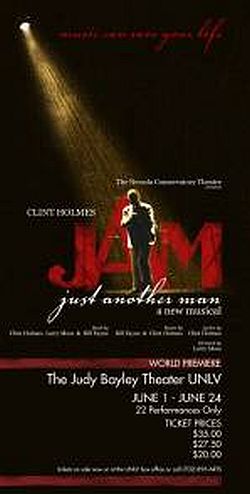 "Just Another Man" is playing at the Judy Baily Theatre at UNLV. It is there for only a short time, but it has huge aspirations of going on to London, Chicago, and eventually Broadway. The show is a quasi-autobiographical musical of Las Vegas entertainer Clint Holmes with a score by Holmes and Bill Fayne. The show has a great cast, some interesting songs, good dancing, but the show has some problems with the book, transitions, and staging. Holmes, Fayne, and Larry Moss wrote the book to the musical, which tells the story of singer Rei Coles...it is Holmes life, but just with another name. A lot of the material (if you've ever seen his Vegas show) is the same material that he has been relating to audiences for years. The truth and fiction of the story is a bit blurred. The oddest thing about the entire evening was...why were the names changed? The changing of the names did not add anything, but did add to the confusion of the audience that had to translate back to Holmes whenever Coles was referred to. Adding to the blurriness of the story was the idea that it was all told through the haze of an anesthetic hallucination. Going from his lounge act, to his childhood, to his married life, etc., etc., jumping without sense or flag posts to help guide us along the way. This also stalled any dramatic builds and climatic moments. There are not the insights into this manâ€™s life for which I was hoping. There seems to be a lot of glancing across the surface of situations without truly investigating the deeper and darker side of things. The show itself has a lot of problems...on the one hand, it needs a lot of cutting and re-organization of material, but on the other hand, it needs some truly dramatic moments, some revelations, and some turning points. What is the point of the show? What is the story that is really trying to be told? With all of that said, I had a good time at the show. The cast is extremely talented, and it was because of them that the night was delightful. Holmes, of course, is a tremendous recognized talent, and we all love him. Tezz Yancy, who played the son, is a dancing, singing, and acting sensation. He is filled with a charm and charisma that is amazing. Earl Turner does a really good job as the father. You can feel the pressure and pain of the world around him. Tina Walsh, who is the mother, does a great job as the opera singer, and the stalwart and stable element in his life. Reva Rice plays his first wife, and she is so good that it is almost scary. I am hoping that "Just Another Man" has the opportunity to remake itself. It is a worthy piece of theatre that needs more development and has the basis for a great evening of entertainment. Clint Holmes is a favorite son here in Las Vegas, and it not us that he has anything to prove...it is the rest of the world that has to accept and acknowledge his talent, his ability, and his story.