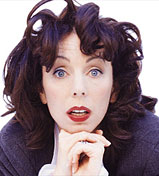 Rita Rudner is performing at the Cabaret theatre at the New York, New York Hotel and Casino. Now a Las Vegas resident, Rudner is a masterful comic and is able to seemingly effortlessly entertain audiences with a lethal wit wrapped up in a soft-spoken delivery. Her clever observations, sharp timing and Gracie Allen-like style, captures her audiences immediately. With her gentle voice, porcelain skin and big, crayon-blue eyes, Rudner shatters the stereotype of brassy, tough comediennes with poise and sophistication. Her comedy is very accessible. She talks about her life, relationships, and her view of the world. The show seems to fly by. Her comedy is wonderful.

The evening is a very simple one-it's small, intimate space and Rita Rudner with a microphone. This simplicity, however, works very well. Rudner simply talks to the audience, and she never fails to entertain us. Rudner's style and persona comes across as being very simple or naive. She talks about how pretty her dress is and her need for many more pretty dresses--a simple concept, but one which most of the women in the audience seemed to relate. What makes her comedy funny is her perspective on these little things, and how she sees and skews reality.

Rita Rudner has parlayed her "niceness" into an impressive list of credits: she won the 1990 American Comedy Award as Best Female Stand-Up, she starred in her own comedy variety series in England which aired on the BBC 2; and she's starred in her first solo hour-long special for HBO titled "Born To Be Mild".

In addition, Rudner became a regular on "The Tonight Show" with Johnny Carson where she trades quips with him with ease. Her other television credits include numerous appearances on "Late Night With David Letterman", performing on Comic Relief, starring in her own HBO "One Night Stand" in '89, being one of four featured comediennes on HBO's first 'Women Of The Night" special and a co-host of the NBC summer series "Funny People". Rudner also recently made Friars Club history by being the first female comic ever invited to be a "roaster."

A native of Miami, Rudner left home at age 15 to seek her fame and fortune on the Broadway stage. "I never even considered college," she says. "I was a dancer - I hated sitting down." She soon landed a role in the national touring company of' Zorba" and went on to appear in "Annie", "The Magic Show", "Mack and Mabel", "Follies", and "Promises, Promises" on Broadway.

After six years of sharing the footlights with others, Rita Rudner decided to go solo and looked around for a career that offered good opportunities for women. At that time the field of stand-up comedy was wide open so Rudner set her sights in that direction and hasn't looked back since. She now commands center stage and seems to thrive on the attention that once used to give her a case of the hives.

Her stand-up routine has been honed excellently, and as a performer and entertainer, she makes the routine appear as if it is completely fresh and new. She seems to have a story for everything. Toward the end of her routine, she allows the audience to ask questions, and every question seems to launch her into another segment of comedy. Rudner is continually refining her act, and she gets better all of the time.

The Cabaret Theatre, at the New York, New York Hotel and Casino, is a nice space for her show. The theatre was built especially for her, and it suits her needs well. It is a smaller space, which allows her to be accessible to the entire audience.

Rita Rudner is a wonderful comedian. She is definitely worth going to go and see. One more really nice and pleasant aspect about her comedy--she doesn't use any profanity in her routine. I've gotten so used to that in most stand-up routines that it came across as a breath of fresh air. Rudner doesn't need the crude language; she is a lady, and a very funny one.