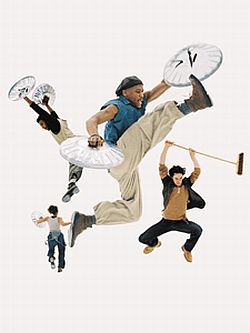 "Stomp Out Loud" is playing at their new theatre inside Planet Hollywood. The production comes to the city with a cast double the size of the original production and inside a new $28 million environment that is specifically created for this production. The extraordinary new production comes from the creators of the international sensation, "Stomp." It was directed and created by Luke Cresswell and Steve McNicholas. The show is an extension of the original, "Stomp," with much of the same choreography and numbers...just with a lot more people. "Stomp" has been around for a long time. When it first came out, it redefined what percussion performance art was all about. In its original show, it was truly unique and astonishing to watch; it was a unique combination of percussion, movement, and visual comedy. STOMP had created its own inimitable form of musical entertainment. Success, however, has a way of breeding a lot of imitators...and with those imitators came a lot of competition. The ability to stay on top of the field became harder and harder for this company...and for a decade or so, the production of "Stomp" was virtually unchanged, and consequently, became a bit stale. It still had great appeal. Its very nature allows it to be accessible to anyone in the world...rhythms, beats, and movements are international. The lack of words breeds no communication barriers, and a lot of people in the world still needed to see this original production...but the time has come to do more. "Stomp," which originated in Brighton, UK, opened in New York in 1994 and has since played over 10,000 shows around the world. "Stomp" is currently playing in New York, London’s West End, and on both international and North American tours. "Stomp" is the winner of London’s Olivier Award, off-Broadway’s Outer Critics Circle Award for Unique Theatrical Experience, and an Obie Award. Visit www.stomponline.com for more information. With "Stomp Out Loud," the experience is transformed for Las Vegas with new sequences and choreography, a dynamically expanded cast and a completely new environment immerses the audience from the moment they enter the 1,500-seat theatre. "Stomp Out Loud" is a journey through sound, a celebration of the everyday, and a comic interplay of characters wordlessly communicating through dance and percussion. It is a celebration pure and simple, and that is what it should be. The essence of "Stomp Out Loud," is exactly the same as "Stomp." It has all of the same basic elements, but it is better. The additional people, the new choreography, and the new environment make this a show that is truly worth seeing...if you have never seen "Stomp" or if you have already seen "Stomp" a half a dozen times; it is worth the effort to go and see "Stomp Out Loud."