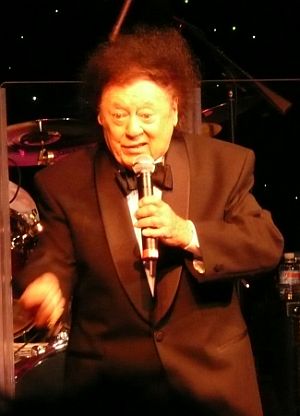 Marty Allen and Karon Kate Blackwell are playing in "Hello Dere" at the Gold Coast Hotel and Casino. This duo has delighted audiences for a long time---specializing in cruise ship entertainment and receiving many accolades from their time spent at sea. And while it is easy to see why they have won awards for best cruise ship entertainment, it is great to have them here in Las Vegas. They are at home here, and in turn, they have found a home at the Gold Coast. Allen presents a comedy-music-dance show with singer-composer Karon Kate Blackwell. The show is a nice throwback to a kinder and gentler form of entertainment, and it is both welcome and refreshing. Marty Allen has been performing for decades...a lot of decades. Marty Allen is one of the most versatile performers in show business. He has worked solo as a comedy headliner in nightclubs and as a dramatic actor in TV roles. He has legendary status in the entertainment world, and now in his eighties, he is still going strong. It is amazing to still be able to watch him work the crowd and ply his trade like very few people are able to do. Now granted...a lot of his material is old...very old, but there is definitely something about classic comedy that makes it classic. These jokes and bits work for a reason. It is why they are "classics"...but to make them work, you need to have a master, like Allen to deliver it. His friendly "Hello Dere" greeting is known and imitated by fans throughout the world. "If for a few moments I can make someone laugh, forget his pain, his disappointments, his unhappiness, well...that's the whole bag. That's what comedy and my performing are all about." -Marty Allen His partner (and wife of 20+ years) Karon Kate Blackwell is a star in her own right. Whether she is singing solo or playing the foil to Allen’s comedy bits; she shines supremely. She has a wonderful charisma, energy and charm about her that makes you immediately like her. And while I know that the two of them have been working these routines for years, each of them seemed to be fresh and brand new for this audience. Marty Allan and Karon Kate Blackwell put on a good show. It doesn’t have any frills. It is just good, straight entertainment. A lot of the material is dated, but the way in which it is presented is worth it. Seeing both a classic performer, and a powerful singer, these two certainly hold the audience. It is a glimpse of what entertainment was...and what many people still believe, that entertainment should be.