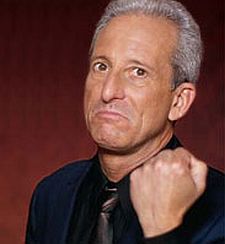 Bobby Slayton is back at Hooters in the Night Owl Showroom offering up some of the most outrageous stand-up comedy in the city. He is wonderfully insulting and politically incorrect, and if you are easily offended...don...t go. Often referred to as "The Pitbull of Comedy," Slayton has been performing his own intense style of stand-up comedy for over 20 years, becoming one of the best known, respected, and energetic comics working today. His show is hilarious, and I spent the night on the verge of tears because I was laughing so much. Slayton is not a comedian for the faint of heart. He is very deliberate in his completely non-politically correct outlook on topics, issues, and life around him. He uses stereotypes as springboards, and he does his best to offend everyone on one level or another.

Audiences around the country may recognize Bobby from his roles in movies such as "Get Shorty," "Ed Wood," "Bandits" and "Dreamgirls." He's been seen on dozens of television shows including "The Tonight Show" and "Politically Incorrect." Bobby's many appearances on HBO have included "Comic Relief" & his own stand-up special. He was a series regular on the HBO series "Mind of a Married Man," and played 'Joey Bishop' opposite Ray Liotta and Joe Mantegna in the critically acclaimed film "The Rat Pack."

Slayton's distinctive gravelly voice has often been heard on animated shows like "Dr. Katz'" and "Family Guy," as well as many popular radio shows across the country including Howard Stern, Kevin & Bean, and Tom Leykis.

The showroom is oddly shaped and sized. The stage and the sightlines are not great, but they do serve the purpose adequately.

Slayton's show features an opening comedian...he is fine for the most part, but you are exceedingly happy when Slayton emerges, and you immediately understand why he is the headliner. His style, energy, and charisma burst forth in the room, and you simply want to watch him.

Slayton's raunchy approach to his comedy seems to be a good fit for the room and the casino. Most of his humor is observational, and always has enough plausibility to make it feel true. He is a guy's comedian, and men will appreciate him the most---women may take a bit of offence.

Slayton's comedy show is very funny, very offensive, and not for the overly sensitive. I could go back and see it almost on a nightly basis. The observations always make you think twice, and always make you laugh.