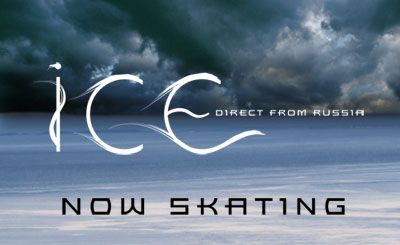 "ICE: Direct from Russia" is playing at the Versailles theatre at the Riviera. It is an ice show that combines traditional ice skating with acrobatic and aerial performances. The cast of 42 Russian skaters (according to the literature) will guide audiences on a magical journey from the bitter cold of Moscow to warmth and vibrant colors of the Las Vegas desert. Debra Brown, of former Cirque fame, adapted the show based on the work of the Moscow Ice Circus and creator Sergey Ryshkoff. This is a production that is going to have a wide range of opinion---people will either love it or hate it with very few people wavering somewhere in the middle. I believe that the show has a lot of problems. The production is superficially pretty. The costumes are nice, and the performers are all very beautiful people. If you know nothing about ice skating and if you know nothing about the circus arts; then this will be a fun and mindless evening of watching pretty people gliding across the ice and performing some tricks, but the crust is very thin. The more you know about either of these arts, the more you will disdain this production for its mediocrity and ineptitude. The first thing to take issue with is the theme, (the magical journey from the bitter cold of Moscow to the warmth and vibrant colors of the Las Vegas desert.) It is complete crap. It is an exercise of mental masturbation that should have been left in the conceptual stages of development. Other then the side projections; nothing in the show conveys, reinforces, or develops this theme. People that hadn’t read the literature were shocked to learn that there was supposed to be a theme. The show really was just one disconnected number after another. There was no theme. Debra Brown owes the Moscow Ice Circus her deepest apologies. She has ruined a good company. She threw away everything that made this company a notable troupe in the world and forced what they do into a misguided Cirque-type formula. The biggest problem with this is that she doesn’t have the time, money, thought, structure, or foundation that a Cirque production would have. The ineptitude of this attempt pervades the entire production. Another major mistake...when you have an ice show, you really need to have ice skaters. An intermediate amateur could have done ninety percent of the skating that was presented. It was more than half way through the show before anyone did a jump---and the same skater performed all of the decent jumps. Surely he is not the only decent skater in the company, but he was the only one that showed us anything beyond that intermediate amateur level. There were no good spins, no deep edges---just a lot of gliding...and after watching the production, you become convinced that Russian skaters can’t turn to the right...all night long they circled the ice to the left, to the left, to the left...all night long. I became nauseous watching the endless turns to the left. I know that right hand turns are possible, but this is how they were directed. The circus acts come off better than the skating. There are a couple of really good segments. The man in the German wheel is wonderful and is even more amazing because it’s accomplished while wearing ice skates. The rest of the acts are fine, but they pale when you consider that you can see better acts for free at Circus Circus. The production may be suffering from the "Jack of all trades" syndrome. These performers are neither dedicated skaters, nor dedicated circus performers; and the double duty which they pull keeps them from being at the top level of either discipline, and in a town where you can see world class acts around every corner the comparison does not work in their favor. I really wanted this show to work...I really did. Ice shows can be wonderful, and the combination of ice and circus is a great idea (well, it is what the Moscow Ice Circus does, or at least what they used to do before Debra Brown directed them.) It is a shame. So much potential...so little accomplishment.