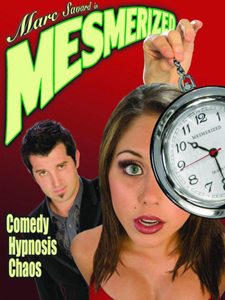 "Mesmerized" is playing inside the V theatre at Desert Passage Mall at the Planet Hollywood Resort & Casino. Marc Savard is the star of the show and has been mesmerizing audiences from around the globe for the past 14 years, and he has found a new home in Las Vegas at the V Theater. With a combination of hypnosis and mayhem comes the new show "Mesmerized."

"Mesmerized" is produced by David Saxe and with David's production background and creative mind, combined with Marc Savard's hypnosis talent, "Mesmerized" brings a whole new hypnosis show to the Las Vegas Strip. "It is more than just a hypnosis show, it is a mixture of hypnosis, comedy, and showgirls," said Saxe, Show Producer and CEO of V Theater.

Savard first took an interest in Hypnotism as a teenager after witnessing "the Man they call, Reveen." This began his research into the fascinating field of the mind, and in a few short years, Savard has become an entertainment phenomenon who continually re-defines hypnosis entertainment. Savard used his hypnotic skills to put himself through college as he performed weekends for nightclubs, corporations and private parties.

Savard continues to build his resume as he regularly provides mind training for some of the world's top athletes. These athletes range from World Strongest Man competitors, Professional Hockey Players, Pro Golfers, Mixed Martial Artists, Figure Skaters, Poker Players, and many more. Savard has since moved his entire operation to Las Vegas and began the pursuit of building a career centered around a resident headliner show.

I have to give a bit of a disclaimer...I hate hypnotist shows. I don't like it when the audience is the entertainment. I don't care for the puppet/master relationship that is set up with these types of shows, and I hate it when audience members are set up to be embarrassed.

With that said, and in contradiction to all of these precepts, I laughed uncontrollably---even when it felt totally wrong, I still laughed. The volunteers are there of their own volition, and they are willing participants. So with a caveat emptor in mind, I eased up on some of my notions and enjoyed the show.

Savard doesn't seem to have the egotism that is usually associated with hypnotists. He seems far more real and accessible. He's just a guy up there having fun. It was refreshing to watch him work his "magic" with the volunteers.

If you like hypnosis shows, this is a good one.