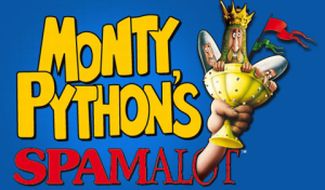 Monty Python's, "Spamalot," starring John O'Hurley as King Arthur, is playing inside the Grail Theatre at the Wynn Las Vegas Resort & Casino. Eric Idle has created a deliriously funny live spectacle which tells the legendary tale of King Arthur and the Knights of the Round Table, and their quest for the Holy Grail. The show features lusty maidens, dancing divas, a killer rabbit and the only legless knight appearing on the Las Vegas Strip. Monty Python's "Spamalot" is written by Eric Idle and is lovingly ripped off from the motion picture Monty Python and the Holy Grail. The show is directed by Oscar and Tony Award-winning legend Mike Nichols.

Monty Python's SPAMALOT has been honored with dozens of awards, including the Grammy Award for Best Original Cast Recording and three Tony Awards, including Best Musical. The production has been proclaimed the World's Funniest Show by audiences and critics around the world... ...okay, with all of that said...I don't know how it won a Grammy Award, and the choices for best musical that year must have been slim. It is a funny show, but I would not put it in the "World's Funniest" category.

I don't want to be the boy that says the king has no clothes on, but the show simply is not as good as the hype that seems to be swirling around it. I liked the show. I thought that it was very entertaining. I would like to see it again...but don't go into the show thinking that this is going to be a life affirming event.

In the adaptation of the production for the Las Vegas stage, there are some things that are obviously missing...and you'll know what these are if you're a Python-o-phile.

It is a fun and entertaining show. John O'Hurley does a great job. His demeanor seems to be just perfect for the role of Arthur. The entire cast seemed to do a great job, and in typical Python fashion, a lot of the performers came back on several occasions doing different roles. It is presentational and theatrical. We never forget that we are seeing a "play" and having a lot of fun while doing it. I was only disappointed in the Lady of the Lake...the audience responded to her very well, but there was something that was flat and missing from the role for me.

The bottom line, though...if you like Monty Python, then you'll love "Spamalot." If you're not a Python fan, then the show will be fine and fun.

The new Grail Theatre inside the Wynn is just beautiful. They have done a great job at creating a space that suits that production nicely.

The material is familiar, and the show is fun. I wish the entire "Spamalot" company a lot of success. We need this production to succeed so that we might have more Broadway to Vegas shows.