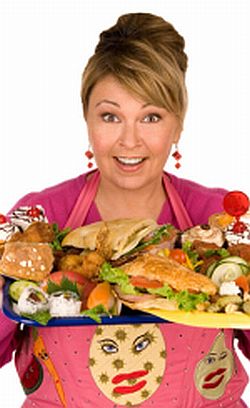 Roseanne Barr has brought her "All You Can Eat Comedy" stand-up routine to the Cabaret Theatre inside New York, New York Hotel & Casino. This visit to the Strip is the product of a renewed devotion to stand-up and a desire to make people once again laugh in the face of serious things that are going on in the world. The new act took some getting used to, but once she got things going, the audience seemed to be eager to go along with her. Barr's most recent project has been hosting Nick at Nite's third season of "Funniest Mom In America." This six-part reality series, which premieres in early April, follows the journey of moms across the country as they compete for the title of "Funniest Mom in America." Several of the semi-finalists will make guest appearances on stage at Barr's show during the last few weeks of the run that is scheduled to end April 30th. Barr has done a variety of things in recent years, including hosting a talk show, filming a children's show, and working with a cooking show...it was good to see her back on the boards, plying the trade that she has always done best. The new act did start slowly...it took a while to get used to the grandmother focused on the apocalypse, rather than the domestic housewife humor that brought her fame in the 80's. Her initial questions to the audience and discourse on Armageddon were received with more of a questioning silence than anything else. It seemed to take the audience by surprise, and no one seemed to have a response to the statement, "We'll all be dead in two years." The audience was not with her at the top of her routine, and it seemed as if she had to change gears on several occasions to bring them around. Neither was Barr's return to stand-up assisted by her video opening, nor her warm-up act, drag comedian Jackie Beat. The video opening (of Barr getting her make-up done by Beat) was amusing, but lasted way too long; and sadly, when Beat came out to do her set, she was less amusing than the video, and was received with extended periods of silence. Barr, though, is enough of a pro to know when to change course...she got back to a lot of her material that was more familiar to the audience and had a solid track record. Once the audience was back in her corner, she was more easily able to work the new direction of her routine. Having audience members fill out cards with questions before the show offered some of the best moments of the evening as Barr offered up "psychic" predictions and answers to these questions. Her quick wit and élan came alive during this segment. Barr's return to stand-up is a welcome addition to the Strip, but the new material will take some time to get used to...or needs one more revision.