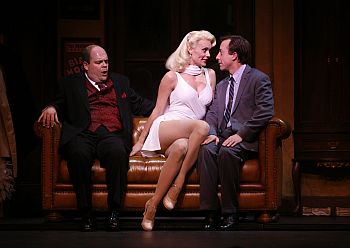 The Mel Brooks comedy, "The Producers," (now starring Tony Danza) is playing inside the showroom at Paris Las Vegas. It is a fast, furious, and hilarious show that should win the hearts and minds of both the locals and the tourists. For the Las Vegas stage, the two-hour plus show has been cut down to ninety minutes and compresses the action into a non-stop whirlwind of slapstick riotousness. The show opened on Broadway in April of 2001, received rave reviews, and won more Tony Awards than any other show in Broadway history (12 awards, including Best Musical.) The show is based on the 1968 film and tells the story of Max Bialystock and Leo Bloom---a pair that come up with a scheme to raise money in order to create a Broadway flop and pocket the difference. They utilize the talents of Roger Debris, a flamboyant director, and work to bring to fruition, "Springtime for Hitler."

The show is sooo much better than when I saw it six months ago. Tony Danza does a great job as Max Bialystock, and the cast seems to have all pulled together. This is the show that should have opened six months ago. The true essence of "The Producers" is back. The emphasis is in the right place, the action moves like it should, and the story once again makes sense and builds in all the right places. It is now a wonderful experience.

When the show opened with David Hasselhoff cast as the director, Roger DeBris, the entire production was skewed. It was as if there were two casts on the same stage fighting for the same recognition…there were the "producers" and then there was the "director," and the two factions didn't seem to blend very well together. Each side was competent, but neither side won. When the show opened, it was a huge disappointment.

The show is about the two producers, Bialystock and Bloom...hence the name, "The Producers." With Danza in the lead role (along with Larry Raben,) the show is able to really take off. They do a wonderful job as the two producers that do their best to scam little old ladies out of their money. They are the driving force in this production and deserve many accolades.

There is an ease with the production that didn't seem to exist before. Danza provides a strong presence to the show as well as his talents. Raben (how has been in the show since the beginning) seems to have settled into the role of Leo very nicely and has made it his own.

Leigh Zimmerman as Ulla is a true highlight of the production. Zimmerman has it all...the look, the charm, the style, the voice, and the comedy. When she is onstage, it is difficult to look anywhere else. She exudes charisma.

Lee Roy Reams, as Roger DeBris, has found facets of the character that didn't exist previously with the role, and has found a way to truly integrate the character into the rest of the production.

"The Producers" is the best mix of an old fashioned musical with classic humor and sensibilities. It is a well-branded production, and with the talents of Danza, Raben, Zimmerman, and Reams this show has become tremendous. Las Vegas could certainly use this production. There is really not another one like it on the Strip...many that have tried, but no one has really succeeded yet...we'll hope that "The Producers" will do it.