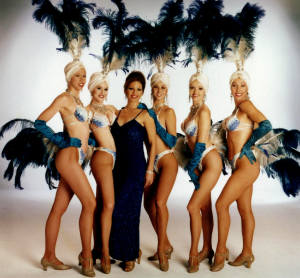 Viva Las Vegas plays in the Broadway Theatre at the Stratosphere Hotel and Casino. It is an afternoon show filled with dancing, music, and comedy. It is a very mixed show with both highlights and low lights. The dancers and singer are very good, but the comedy runs the gamut from good to utterly awful. On the whole, the show works as an adequate diversion of entertainment, which is good to escape the hot afternoons in the Las Vegas heat. The Broadway Theatre is a good venue for just about any show. It is a medium sized showroom, neither too big, nor too small. The room is open enough to allow comfortable seating, so no one has to be crammed up next to each other uncomfortably. There is good technical support in the theatre; and the lights, sound and stage space are used very effectively. It is a nice space, and could certainly be utilized for more effective and stronger productions. The showroom, itself, does not have any cocktail service. If you want a drink you need to get it from the bar outside of the theatre. Viva, is meant as an afternoon diversion, and for that, it works fine. Probably the best part of the show is the dancers. Even though the dancers function in more of a support and framework capacity, (rather than being highlighted themselves,) they do a better job at entertaining us than any other aspect of the show. Their routines are simple, clean, and on target. I wished that I could have seen more of them. I wish that they could be featured in their own number, and have one of the comedy routines cut. The show would be stronger and more entertaining. The next best aspect of the show is the singer. She is a good singer. She is pretty. She is capable, and she gets to show off her stuff in a variety of numbers. Then there is the comedy. The emcee comes out and does a few jokes, but for the most part relies on crude and toilet humor--with this being a show that one is supposed to be able to bring their children, I didn’t appreciate his brand of humor--especially for the families in the audience. Next, came "Big John," the featured comic of the afternoon. He was a pretty good comic, except that it took him so long to make a point, that it almost wasn’t worth the wait. Finally, there was the "comic" performer who did his version of an "Elvis" impersonation (I put comic in quotation marks because I know that this is what he was trying to achieve, but I found him anything but humorous.) I surmise that this was supposed to be a vision of what Elvis might have looked like if he had continued to abuse drugs and alcohol, but somehow lived. Unfortunately, the performer has no charisma, no presence, and no talent. I don’t like to be this cruel, but he looks as if he came from a bad, "help the homeless" program. Then, to add insult to injury, he begins to disrobe. I felt nothing but embarrassment and shame for myself, the audience, and for him. Even with it’s bad points, Viva Las Vegas is a decent diversion in the afternoon. Go out and get another drink during the Elvis bit, and you should have a lot of fun. The dancers and the singer are good enough to balance out the bad, and it is a good way to get away from the afternoon sun.