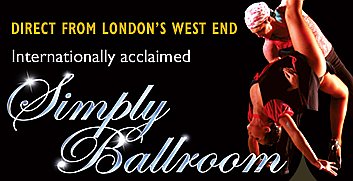 Simply Ballroom is playing inside the showroom at the Golden Nugget Hotel & Casino. It is an evening of both elegant and exciting dancing brought to you by some of the world’s foremost ballroom champions. It is not a stolid and staid evening of boring dance moves...this is not Ballroom dancing as it is commonly thought of...it is fresh, new, and exciting; and Simply Ballroom serves as somewhat of an introductory course, giving us glimpses of the styles, their history, and their execution. We are shown differences between common ballroom and competitive dancing, but this is not simply a Ballroom 101 class. The show is exciting and fun to watch and knowing more about each of these elements gives us a deeper appreciation of what we are watching. Created by Jon Conway, one of London’s theatre producers, Simply Ballroom celebrates the art of dance by mixing the myriad styles of competitive dancing. With this international cast of dancing champions, the show features a nonstop exhibition of different ballroom styles, including waltz, rumba, tango, cha-cha, paso doble, American jive and more. There has been a recent renewal in the interest with dancing with the success of television series such as "Dancing with the Stars" and "So You Think You Can Dance." As a whole, we know more about dancing than we did a couple of years ago, and this fascination allows us to better appreciate a show such as Simply Ballroom. The production came from England where the show has been a success in London’s West End. Heading up the show are a pair of singer/emcees. This pair guides us through the show and put a voice to many of the songs. They are talented singers and have a delightful elegance and interplay between one another. The music that was utilized kept things very interesting. Modern songs were often used for these classic dance styles, and the use of this music brought a new dimension and vitality to what we might think of as passé dancing. Then of course are the dancers...each pair being an accomplished champion in their own right, they are tremendous show people with élan and charisma; beautiful technique and boundless energy. They are the true stars of the production, and they have certainly earned that right. The showroom at the Golden Nugget went through a renovation prior to this production, and the new theatre is beautiful. There are plush theatre-style seats, state-of-the-art light and sound systems, and a snack bar with candy and popcorn in the lobby. The ceiling is a bit low, and the stage is almost too small to contain all of these dancers, but it is a great upgrade. Simply Ballroom is a good show. I hope that it gets the audiences that it deserves.