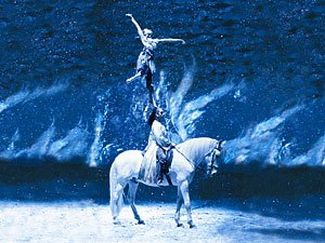 "Cavalia" is playing under a giant and majestic white big top in the Rio parking lot. It is a spectacular equestrian event and explores the relationship between humans and horses, and blends the talents of the horses with acrobats, dancers, musicians, and riders. Projected scenery creates beautiful atmospheres, which allow the horses to romp and play. It is, though, a slow moving and rather indulgent exploration which has the makings of something brilliant, but oftentimes misses the mark. "Cavalia" was created by Normand Latourelle of Cirque du Soleil fame...which is very reminiscent of another equestrian event attempt by Giles Ste-Crox, also of Cirque fame, called "Cheval." It seems that Latourelle learned a lot from Ste-Crox’s attempt. He has gotten away from the typical circus horse presentation. The manes and tails are not braided, and the horses look truly natural in the space...and yet, there is still something missing. For those that truly have a passion for equestrian events, I’m sure that this is the best and most unique show ever. But for those of us that are just common folk...seeing a horse doing a high step and backing up are great...once. When we see this behavior a half a dozen times, it just doesn’t solicit the same response as the first time...and once we’ve seen this behavior done by one horse, seeing it done by six horses doesn’t really deepen our appreciation of the art, it simply causes our attention to wane. One of the problems with this show, which is similar to the problems with its predecessor, "Cheval," is that in one form or another, we have seen all these tricks done by horse before. Horses have been doing these same tricks for centuries. They have been filmed, done in circuses, and in shows. We have seen these tricks before. What we haven’t seen is the combination of the dancers and acrobats working in conjunction with the horses, and when that happens, the magic of the production does, indeed come alive. The best numbers in the show involved multiple elements. "Fly" with two couples and a pair of horses was glorious. When the women would float above the men and horses, it was magical. The highlight of the show involved trick riders crossing the stage at a gallop, while a performance of a Russian Bar and Bungees ensued. The combination of these disparate elements worked very well together and really brought the level of the show up and created something truly unique. Famed "Horse Whisperer," Frederic Pignon, is the centerpiece of the production and does a couple of segments with the stallions. His style of training is unique in the world and is based on patience, love, and total respect for the horses. It is fascinating to watch...well, I should say that it is fascinating to watch for about five minutes, after that, we wish that he would just get the job done, and after about fifteen minutes I was wishing that he would just crack a whip...but I digress, that last comment was born out of a crassness and impatience that haunts me when it comes to production. Anyone with a deep deep appreciation for this kind of thing will indeed be enthralled. "Cavalia" is an interesting show. It was uneven at times with elements ranging from the indulgent to the spectacular. Some people are going to love this show and praise it up one side and down the other, while some people will simply like the show...true equestrian fans will love it.