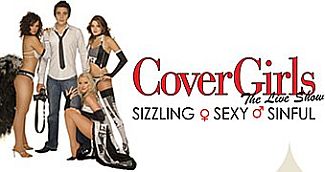 "Cover Girls" is playing inside the newly remodeled showroom at the Golden Nugget Hotel & Casino. This show is a mess. It features a line of dancers that have to execute amateurish choreography, a thin and poorly developed concept, a completely puerile 3-D movie segment, bad lighting, poor costume choices...there are so many things to lambaste, it is difficult to even know where to start. Let’s back up...The showroom at the Golden Nugget has been closed for the past seven months for remodeling (by the way, I think they did a great job with the renovation,) and during this time, the Nugget actively sought out new shows to fill this space. Of the hundreds, if not thousands of possibilities, two shows from England got the nod. ("Strictly Ballroom" is the early show, and "Cover Girls" is the late show.) They were chosen (presumably) for their excellence and their ability to redefine entertainment in downtown Las Vegas. I haven’t seen "Strictly Ballroom" yet, but as far as "Cover Girls" goes...they made a bad choice. The phrase, "What were they thinking," popped into my head on several occasions throughout the evening. The premise is simple. There is a photographer, and he shoots sexy cover girls---though, we never really experience a photo shoot per se, each segment breaks into a dance and then the concept conveniently goes away. The lack of attention to detail was really bothersome. If he is supposed to be a photographer, at least give him a prop camera that looks worthy of being a photographer...instead, he prances around with a camera that looks as if it was picked up at the last minute from the corner drug store...furthermore, since the show centers around this photographer, one would think that there would be some interesting photos somewhere...unfortunately, even the promo shots in the hotel look as if they were done by a beginner. The choreography for this production was embarrassing. Every number eventually had all the dancers spread across the stage doing unison movement that looked to be on par with the local high school. It was a completely amateur effort. Most of the dancers look as if they have talent, but when the moves are simplistic and uninteresting, there is not a lot that can be done. I say most dancers, because there was one dancer that night that was a full beat behind the rest of the company. She was completely lost. We watched her as see watched the other dancers to figure out where she was supposed to be. Initially, I had heard the "Cover Girls" was covered, except for the cyber-babe. So I was surprised to see a couple of the dancers go topless in a few numbers...and I mean a couple...two of the dancers to be specific. Two of the dancers got topless, the rest did not. It set up a very uneven and awkward look to the show. Two dancers cannot carry the topless-ness for the entire production. It reminded me of the failed "Aussie Angels," which was a short-lived production at the Hilton. The women were flown in from Australia, set up in housing, and then told, "Oh, by the way, the show is topless." Most of the dancers refused, and in that case, three of the dancers tried to carry the topless-ness for that company. It didn’t work then either. Now we have the cast of "Cover Girls" being flow in from England...It just seems like a bad and failed late decision. The big thing for this production...the element that has been promoted over anything else...the thing that is supposed to redefine adult entertainment for Las Vegas...an interactive 3-D experience with a cyber-babe. It certainly sounded intriguing, but it wasn’t. First of all, it’s not interactive. It’s a movie that plays while the MC tries to prompt answers from the chosen audience "director," but the movie still plays whether the participant says anything or not. It is not interactive because there is no reciprocal reaction...it’s just like yelling at the screen during a football game. The game will continue to happen whether you yell or not (even though sometimes yelling makes us feel better.) Secondly, the cyber-babe is a stereotype—looking as if it were made by computer geeks that have never had sex using software that is just out of date. Between this and the scenario, it is sophomoric at best, and certainly the worst part of the entire production. The lighting was generalized, non-specific and never created atmosphere, isolation, or emphasis. The costume choices were always odd and never seemed to match what was going on. For example, during the "workout" scene, the dancers came out in an array of colored bikinis---not bad, but not really appropriate. The only thing that was redeemable in this production was the singer, Zoë Birkett, who is the Kelly Clarkson of Brittan. Birkett won the English version of "American Idol," which is called, "Pop Idol." She has a great voice and a strong presence. It was a pleasure to see and hear her. The much anticipated re-opening of the Golden Nugget showroom is a bomb. It is truly disappointing to see such a low caliber production come out of a supposedly extensive and exhaustive search. If there are not substantial changes to this show...I would hope that the English cast signed only short term leases on apartments, because if things don’t change with this production, they’ll be heading back across the pond very soon.