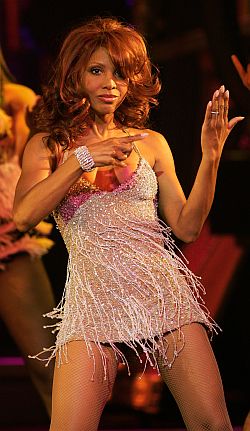 Toni Braxton is performing in her show "Revealed" inside the showroom at the Flamingo Hotel & Casino. The show started out on a bit of a questionable note, but as it progress, got better and better. It turned out to be a great night---the music is wonderful, the band is great, and the dancers are tremendous. Braxton thrills us with her voice and her hits, and even gives us a glimpse into her own life. It is the type of personable headliner that we wish were in all of the showrooms. The show didn't start off too well. Emerging at the pinnacle of the set, Braxton begins her show by lip-syncing her first two numbers. I suspect that producers wanted the show to start with a bang and have Braxton and all of the dancers perform a large production number...because of the dancing involved, vocal tracks were added to the mix and Braxton lip-synced it. It was questionable at some points---first of all, I couldn't believe that it was actually happening; and secondly, the mix was so bad that I figured it couldn't possibly be pre-recorded, because if it was, it should have sounded a lot better. Third, Braxton appears as if she doesn't even care...she looks as if she isn't even trying to match the words with the movement of her mouth. It is awful. The lack of enthusiasm and the half-hearted attempt at mouthing words all for a number that really didn't have a lot of enthusiastic dancing for the star. It is by far one of the worst openings of a show I have ever seen. I thought of running out of the theatre, but instead braced myself for the worst. Thankfully, once the first two numbers were over, the pain went away, and the show seemed to actually start. From that point on, Braxton does what she does best---she actually sings. A real microphone is brought out, and we get to hear her for the first time. She is one of the most successful R & B artists in the world and has won six Grammys. The bulk of her song list is familiar, and the audience loves it. When Braxton sings, she comes alive. She interacts with the audience and becomes lively and charismatic. Suddenly past the first two numbers, she is the star that we have come to see. We admire and adore her. She is fabulous. Her show is rounded out by a wonderful group of musicians and a troupe of tremendous dancers. The musicians are a tight group and hot players. The dancers are some of the best in town. They cover a wide range of styles and surprise us with a combination of contemporary and classic dancing. The Flamingo showroom was built for headliners. It is a great place to see a show of this type. There is a great audience to performer relationship, and the space lends itself to a personable encounter with the star. Toni Braxtonï¿½s show is great (after the first two numbers) and it will hopefully have a long run here in townï¿½but get rid of the lip-syncing! I donï¿½t care if the star wants to dance to one of her tracks---thatï¿½s fine, but donï¿½t pollute the performance with a feeble lip-sync attempt. Obviously, those first two numbers put such a bad taste in my mouth that it almost ruined the entire production for me. The show turned out to be great---I wish that I had arrived late.