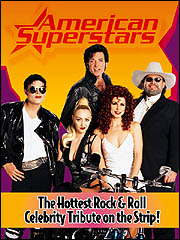 "American Superstars" plays in the Theatre at the Stratosphere Hotel and Casino. It is a show of imitators that work to bring you the stylings of Elvis, Christina Aguilera, Britney Spears, Tim McGraw, and Michael Jackson. The production is supported by a dynamic troupe of dancers and a strong band, and all in all, even though some of the acts are better than others, it is a pretty good evening of entertainment.

Even though the evening is supposed to be about the impersonation of famous performers, the real "stars" of the show are the dancers. This dynamic troupe of dancers always seems to be right on target. They dance in a variety of styles and seem to handle each change easily. These dancers are the consistent element that ties this production together. While each of the imitators only comes out to do their segment, the dancers are there throughout the show. It is their energy and charisma, which usually make them more interesting and entertaining to watch than each of the individual performers. They are the hardest working members of this production, and they certainly deserve their accolades.

As far as the other performers go, they were fine...The Britney Spears impersonator was a strong dancer, but seemed to lack the charisma to really carry the stage. The Christina Aguilera was a very strong singer and did a pretty good job. It wasn’t as if either of these were really doing anything wrong, it was just that there seemed to be something missing--presence, energy, commitment, or charisma. These female performers seemed to be marking through their performance without injecting that, "extra special something" to make them more memorable. They were out-shined by the dancers. The addition of these two acts seemed to be just a catch to get audience members into the showroom.

The Elvis was pretty good. He had all of the sound and all of the moves. The reaction of the audience was especially great. The women screamed and yelled as if he was the real thing. He made for a strong opening of the show.

The Michael Jackson was an amazing mover and dancer. He was a joy to watch. I was interested in seeing the response to him, since there has been many negative events with regard to Jackson, but the performer handled it wonderfully---often stepping out of his character to separate himself from the persona.

The Tim McGraw was fine, but forgettable.

A four-piece band supports the production. For being so few in number, they filled out music quite well. I love the dynamic of live music. The theatre at the Stratosphere is a good venue for just about any show. It is a medium sized showroom, neither too big, nor too small. The room is open enough to allow comfortable seating, so no one has to be crammed up next to each other uncomfortably. There is good technical support in the theatre; and the lights, sound and stage space are used very effectively. It is a nice space, and could certainly be utilized for more effective and stronger productions. The showroom, itself, does not have any cocktail service. If you want a drink you need to get it from the bar outside of the theatre.

American Superstars may not be art, but it is good entertainment. There is nothing offensive in the show, and it moves at a fairly quick pace. It would be appropriate and entertaining for children and families. It is also a fairly reasonably priced show. It is good basic entertainment.