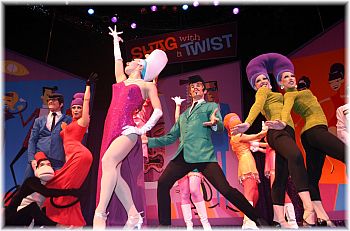 Note: Now playing at the Plaza. "Shag with a Twist," a retro-cool musical production, is playing at the Krave Nightclub, just outside of the Desert Passage shops at the Aladdin. It brings us a groovy vibe, swinging music, and sophisticated dance. It is a musical murder mystery set at a 1960s Tupperware party, "Shag With A Twist" was created by famed visual artist Josh "Shag" Agle and choreographer Cynthia Bradley. As if immersed in a cartoon come to life, audiences can expect a zany plot, outlandish characters and vividly-colored costumes and sets, all set to swing music and dance. With a show that is so heavily style oriented, it is difficult sometimes to see the forest because all of the trees are getting in the way. Many of the basic elements that create a show are tossed aside in favor of maintaining the "Shag" theme. I appreciate good theatre, and I appreciate strong choices with regard to a show---except when those choices start getting in the way of the fundamental things such as character, character relationships, and plot. "Shag with a Twist" is a cute idea. The art of the artist, Shag, comes to life. The setting, the set, and the costumes are all well done. It is a dance-type performance---none of the characters speak. All of the relevant information is supposed to be imparted to us through their movement and steps. This is accomplished only moderately well---it is cute at first, but quickly becomes tedious. For example, each of the characters comes out in the early part of the show and does a little dance to show us what kind of character he/she is. After about 20 seconds, we get it; but each of the dances goes on and on...both the music and the movement become exceedingly repetitive, and by the time we get to the third or fourth character, we just want it to end. There are a couple of songs are sung by a group of singers...supposedly to be used as guideposts to help us along with the development of the story...again, the effectiveness is only moderate. Repetition also plagues the singers until the lyrics are drilled into your head like some form of torture. This is a show that is in desperate need of some theme and variation. They have the theme down, but they severely lack the variation. "Sameness" pervades the entire production. If this was a ten-minute SNL skit, it would be great. Unfortunately though, it just keeps going on. This is a stylistic show about style, and they seem to miss the point when it comes to telling a story. With a lack of character development, and a lack of really establishing relationships, we as the audience donï¿½t get the chance to care about anyone. We donï¿½t care about the woman who is killed (of course, none of the characters seem to really care either,) and we donï¿½t care if the mystery is solved, and because of all of this we donï¿½t care about the insipid twist at the end. It is really all very contrived. I think that the production started out as a good idea, but then got bogged down when the style became more important then the story. Itï¿½s not enough to just look good. For more information about the show, go to shagwithatwist.com