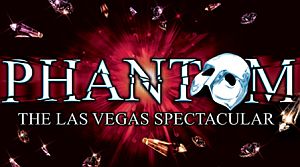 "Phantom - The Las Vegas Spectacular" is playing inside the Phantom theatre at the Venetian Resort & Casino. This Phantom production reunites Andrew Lloyd Webber, director Hal Prince, and choreographer Gillian Lynne; who together reconceived the show into a 95-minute spectacular, including each and every song from the original The Phantom of the Opera production. From the moment you enter the magnificent custom-built theatre, you find yourself in the famed Paris Opera House. It is an enchanting entrance in the Phantom's world. It is an amazing production, the night flew by, and after eight months the show is better than it ever was.

By incorporating special effects and enhancements, made possible today by modern technology, into the timeless music and story of Phantom, new audiences and loyal fans alike will be awed by and the all-new Phantom. "It's a rare opportunity we have to utilize all of the theatrical advancements of the last 20 years and create an environment that is singularly unique to PHANTOM," said Andrew Lloyd Webber.

As spectacular as the production is, though, it is still the story that shines through. The cutting and editing of this show was done very well. It maintains the integrity of the show and highlights each of the songs nicely. There were a few things that I missed from the original...but not for very long. The show progressed at a great pace.

The Phantom of the Opera has grossed more than $3 billion worldwide since its London premiere in 1986, having played more than 65,000 performances in 20 countries and 110 cities. After the Broadway opening, the musical went on to sweep the 1988 Tony Awards, winning seven of the awards, including Best Musical, as well as seven Drama Desk Awards and three Outer Critics Circle Awards. In January 2006, it became the longest-running show in Broadway history, surpassing another of Webber's greatest hits, Cats.

In the 95-minute production, the roles of "The Phantom," "Christine" and "Carlotta" are double- cast due to the challenging vocal score and performance schedule of Phantom. The role of "The Phantom" is veteran stage and opera performer Brent Barrett, seen in the smash Broadway musicals Chicago and Annie Get Your Gun; and Tony Award-winner Anthony Crivello, known for his roles on Broadway in Kiss of the Spider Woman and Les Misérables.

Cast as "Christine" are Sierra Boggess, who was recently seen in the national tour of Les Misérables and Elizabeth Loyacano whose Broadway credits include Oklahoma! and The Woman in White.

Operatic Diva "Carlotta" is played by Elena Jeanne Batman, who comes direct from the same role on Broadway, and Geena Jeffries, seen in the same role in the San Francisco company of Phantom.

On this night, it was especially delightful to be sitting next to the mother and grandmother of Elizabeth Loyacano (who was playing Christine that night.) Seeing the pride and joy in these women's eyes made be appreciate Loyacano's performance even more. It was a wonderful evening.

There are a lot of pitfalls that are created when you start to chop down a piece of theatre, but this production managed to avoid all of them. That, and the addition of all of the wonderful effects, has created a wonderful production, which I hope will find success in this city.