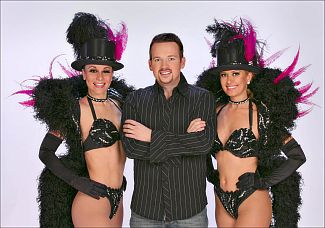 Note: Now Playing at Planet Hollywood
"Nathan Burton Comedy Magic" is playing in the afternoons inside the legendary showroom at Flamingo Las Vegas Hotel & Casino. This afternoon show is filled with fun and interesting magic segments presented by Burton and a couple of dancers. The show has certainly grown over the years; what used to be a bare bones operation, Nathan’s production now fills the space with sets and props. Nathan Burton is a great guy. He is personable and humorous, and his dancers are talented and beautiful. Nathan's style is suitable for children but fast paced and intriguing enough to keep adults entertained as well! His show has a little bit of everything in it---stage illusions, street magic, comedy, and of course, the showgirls. There is enough variety and variation within the illusions to make an interesting production.

The show keeps getting better and better...and even though I seen the show many times, I still like it. I've watched Nathan's abilities grow and mature onstage for more than a decade. He has become a seasoned and consummate performer with a lot of charm and panache. You can't "not like" this man that is personable both on and off the stage.

Burton is thrilled to be performing inside the iconic Las Vegas landmark. You may have seen a glimpse of Nathan on: E! Network's "The Entertainer", starring Wayne Newton; CNN's coverage of Nathan in the "7 Days & 7 Showgirls" stunt; "World's Greatest Magic." or "World's Wildest Magic" on NBC, or "America's Got Talent." His ability to parlay this exposure into something bigger has been tremendous.

Born in Oakland, California, comedic magician Nathan Burton was bitten by the magic-bug at the age of four when he performed his first trick in front of his kindergarten class in the family's hometown of Palm Desert, CA. Although nothing turned out as it should have - he was hooked - and decided then and there that magic was what he wanted to do for the rest of his life.

The best way to describe Nathan is mischievous. He is often like the kid who seeks to get away with a lot of trouble. It is here that we most often connect with him. There is a little imp in all of us that wants to get away with roguish behavior, but never got the opportunity, so we revel in Burton's escapades. The other thing that is evident on the stage is that Nathan is a nice guy. You like him from the moment he walks onstage.

The pacing of the show was great. I was really impressed with how everything moved from one thing to another. There are several new illusions in the production which all add to the overall production.

The show is fun, and it is a great way to escape with the family for the afternoon. Nathan Burton Comedy Magic incorporates unique magical illusions with a mix of comedy, and beautiful showgirls. Nathan has an engaging personality and produces a whirlwind 60-minute show. "Nathan Burton Comedy Magic" appeals to audiences of all ages, and because it starts at 4:00 p.m., the show is the perfect way to spend that lost hour in Sin City.