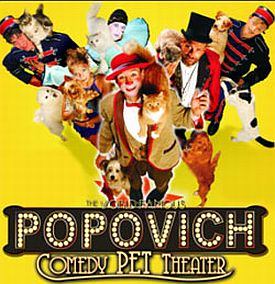 Popovich's Comedy Pet Theater is playing in the afternoons at the V Theatre inside the Miracle Mile Shops at Planet Hollywood. This is a good old fashioned circus romp. It features dogs, cats, a variety of other animals, and some amazing circus acts. And while this show is fun for everyone, I was amazed to watch children, even really young ones, completely engaged and mesmerized by the spectacle. Seen on the Tonight Show, Letterman, and America's Got Talent, Gregory Popovich's Comedy Pet Theater is a blend of unique comedy, world-championship juggling, and the extraordinary talents of performing pets.

The Comedy Pet Theatre, while featuring the animals, is far more than just an animal show. It is an extravaganza of juggling, European-style comedy and circus arts. The ring-leader is Moscow Circus Superstar and Master Juggler Gregory Popovich. He, along with a couple of other assistants, performs in the show. It shows a great tradition of Russian Circus Arts, and while the animals have become the main focus of the entertainment, the show encompasses far more. It is a fun show to amuse the family in the afternoons.

You see a lot of elements from a great circus tradition. It is a highly skilled troupe of performers that delight the audience with a full array of circus arts---some of these include: clowning, juggling, free-standing ladder, jump rope, and others. Added into this mix are, of course, the animals. The animals sell the show. It is impossible to not smile and feel a sense of joy when watching these animals do their tricks. We get to see all manners of dogs and cats performing within this small troupe.

Some of the elements in the show may seem old fashioned, basic, and elementary. For adults, some of these bits may feel a bit tiresome...but all you have to do is look at the kids in the audience. They are mesmerized. Do you know how hard it is to engage small children? And this company does it every day with real skills behind them, and I guarantee that this show is far better than any of the other modern children’s entertainments.

Of course, everyone walks out of the theatre talking about the trained cats. Seeing a cat do anything on command is amazing, but these felines truly shine.

It is admirable to note that all of the animals were rescued from animal shelters. It has certainly taken a lot of time and effort to train these pets. There has to be an incredible talent to do this---especially with the cats. There are, however, books and DVD's which are available for purchase, if you really want to know the secrets.

The V theatre has continued to grow into a better and better venue for shows. The seating has improved, the stage has improved...it continues to grow and serve its products better. I hope that the show benefits from the mall's foot traffic and brings in lots of people. There are coupons for discounts on the show, so be sure to look for those. It is a fun and nice show for the entire family. It is delightful. The Comedy Pet Theater is guaranteed to surprise and delight every audience and is a perfect family show.