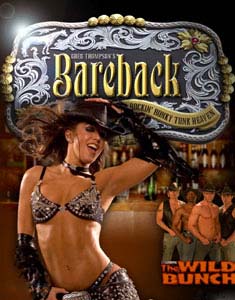 "Bareback" is playing inside the Clint Holmes Theatre at Harrah’s Hotel & Casino. It is the new "country" adult revue by Greg Thompson Productions, which replaces the former adult revue, "Skintight," from the same company. The show features scantily clad cowgirls, strapping cowboys, and all of new country music's most popular hits. Harrah's hopes that the folks who go to the hotel's Toby Keith-themed, "I Love This Bar," will head over to the show and enjoy country entertainment geared to adults. The show has a lot of good, and potentially great, moments; but time and again the production seems to miss the mark. The problem with the show might be that Greg Thompson Productions has gotten the production of an adult revue down to a science…so much so, that this show seems like just another product that is spit out of the factory. It follows (exactly) the same formula that has been used over and over. The show may be dressed differently, but in the end, it is the same thing that we have seen from this company repeatedly. This apparent lack of care to the distinctiveness of this production causes this show to be nothing unique or special. "Bareback" is not a bad show, but neither is it a great show. It is excessively average, and this mediocrity pervades the production in every aspect. There are a couple of great dancers, and then others are okay…a couple of the singers are good, and the others are fair. The music ranges from fully produced numbers to badly tracked midi-versions. The one number with the couple on the mechanical bull has the potential to be wonderfully sexy…but also misses the mark when the dance becomes rushed and a lack of detail is applied to the number. The show should have good appeal to both male and female patrons. Ladies will enjoy "The Wild Bunch", a group of four hunky cowboys who get up close and personal. By adding a few good-looking men to the cast of gorgeous women, Harrah's hopes the show will have more appeal to couples than other topless revues. The show will also draw in some of the burgeoning country crowd. A country-themed adult revue is a good idea for this town. I hope that this production continues to refine itself, because there is a need to be filled here. I hope that this refinement includes some innovation in both the formula and the choreography. Innovation takes both time and money, but it would certainly be worth it. Until then, the show is fair.