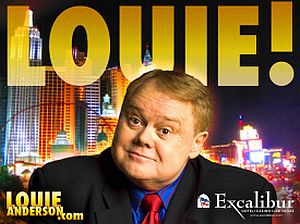 Louie Anderson is playing inside his new showroom at Palace Station. His show is called, "Louie: LOL," and is a fun escape from the normal routine in Las Vegas. Anderson is one of the most versatile and successful comedians working today. He is loved by television audiences who never missed seeing him in the syndicated hit series, Family Feud, and he is respected by readers of his books. He is worshipped by the rising comics he mentors and encourages them with his honesty and wisdom. It is hard to say anything bad about Louie Anderson. He is a genuinely nice person, soft- spoken, and down-to-earth. His low key manner has served him well through the years, and his observations about life seem to ring true in all of us. Most of his stories make you smile or chuckle-there are not a lot of huge guffaws in the evening. It is enjoyable, but very mellow at the same time. As one of eleven children growing up in the Twin Cities, Louie’s depth of material comes from and out of his childhood and family life. Louie crafted routines that rang true for his early club audiences, and these performances led him from his career as a counselor of troubled children to the first-place trophy at the 1981 Midwest Comedy Competition. Comedy Central recently named Louie "One of 100 Greatest Stand-Up Comedians of All Time." He has starred in his own HBO and Showtime Comedy Specials and been a frequent guest of Late Night talk shows. His routines are reflective and low-key. He is not a bombastic or hard hitting comic, but rather dry and straight-forward. His perspective on life and family is both unique and familiar allowing easy access to the audience. As an author, his bestselling books include the New York Times Best Seller, "Dear Dad, ­ Letters from an Adult Child," a collection of alternately touching and outrageous letters from Louie to his late father, and "Good-bye Jumbo- Hello Cruel World," a self-help book for those who struggle with self-esteem issues. Most recently he released his third installment on family, "The F Word ­ How to Survive Your Family." This book offers reader 49 family survival tips that are insightful and often comical. Louie works with numerous charity organizations. Shortly after the attacks on 9/11, he came up with the idea to do a special NYC police vs. firemen show, the prize money going to the NYPD and NYFD Widow’s Fund. Louie put his own personal money to start a pot at the beginning of the week for $75,000. He is also co-founder of the H.E.R.O. organization whose mission is to empower people who are homeless or at risk of homelessness to attain maximum self-sufficiency. H.E.R.O. works with a variety of area agencies to enroll clients in empowerment training. This training teaches them to identify and set goals for themselves and to create action plans allowing their goals to be accomplished. In the world of funny, when it comes to comedy, Louie is a great comedian. ­He is one of the best selling comedians in history, sustaining a lasting admiration and drawing loyal fans to him for over a quarter of a century.