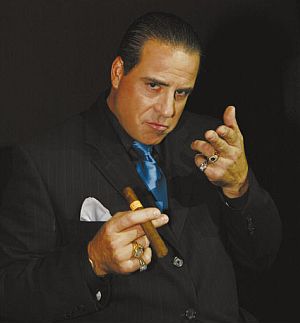 "The Sopranos Last Supper" is playing inside the Comedy Club at the Riviera Hotel & Casino. It is an interactive comedic-musical spoof that is very loosely based on the popular TV series. The show has bounced around several different venues and has hopefully found a lasting place for its production. This is a very different show than the one that opened up two years ago...it has gone through a lot of changes...to the point that this version bears little or no resemblance to that early production. Its lasting success on the Strip speaks volumes for its stalwart persistence. The show still has its problems, but for those that love an interactive show and the Sopranos; it can provide a fun evening. I have tried to like this show...I really have. The people involved in this production are great. They are nice, friendly, and I truly like them. They are good people...but I don't like this show. I have seen this show four times in the last two years, and it has been a painful experience for me each time. I have kept coming back because I want the show to succeed, and granted, each time I have seen the show, it has gotten a little better...but it has never gotten to the point that I have liked the production. The show is ninety minutes. There used to be a dinner that went along with the show, and then that was replaced with an antipasto plate, and now there is nothing unless you make arrangements for a dinner prior to the show. The story is still weak, awkward, and clumsy...Tony Soprano (now going under the alias, Tony Baritone) has been indicted and so a party is being thrown so that the culprit and snitches can be ferreted out. This is a character driven show and needs strong actors to propel the production forward, and there is a fine line between strong characters and bad caricatures. It is a line that not all of the performers know how to walk. The cast is comprised of a full range of actors...there are some very good people that are performing in this show---people that have created dimensional and believable characters...and there are some horrifically bad actors that rely solely upon misguided stereotypes and mugging. They are poster children for bad acting. The lead, Tony Soprano (Baritone) is one of the fine actors. He is a joy to watch onstage. Another character of note is the psychiatrist. She was wonderful in her role. She was both specific and comedic, and she found the right balance between reality and the character she plays. Just to be clear...interactive shows are not my cup of tea, but I don't want to dissuade people that do enjoy this brand of entertainment. If you like getting up with the cast and dancing and singing, then this might be a show that you would enjoy. If you like clapping along with all of the songs and talking with the actors as they go around the room in character, you might have a great time. In many ways, the show is just fun and silly, and there are a lot of reasons that one could have a great time. On the other hand, if you don't want to feel pressured and compelled to participate...then don't go. This is a show that is best enjoyed by people that want to get up and be a part of the production. "The Sopranos Last Supper" is not art...but if you like to get involved, and like interactive shows, then the Sopranos could be a fun time.