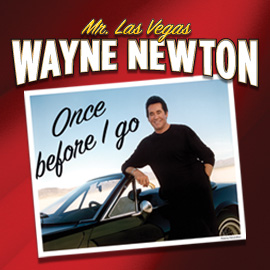 Wayne Newton: "Once Before I Go" is playing in the Tiffany Theatre at the Tropicana Hotel. Wayne Newton is "Mr. Las Vegas." He is a legend. He is a performer that is truly loved and has a strong and loyal following. He has the persona and the charisma to always fill the room and entertain the audience. The performance by Newton is backed up by a live orchestra, a wonderful group of backup singers, and entertaining videos of his past. Sadly, age and time have taken a toll on his voice, but even that doesn't deter the élan with which he performs. Wayne Newton is one of the quintessential Las Vegas performers, and has earned that place in our city through a lot of hard work and many years of persistence. I like Wayne Newton, and I respect all of the good work that he has done both in our city and around the world in support of our military. I want it known that I regard him very highly...so that when I start to tear this performance down, it first comes from a place of esteem and respect. So here it goes... Mr. Newton...please stop singing... I implore you...don't sing any more. It is a painful experience. Age, work, time, medical conditions...whatever it is; has ruined your voice. Stop singing. Ah, but here is the rub...I said (during a gathering after the show) that the show would be far better served if Newton didn't sing, and suddenly I was set upon by a group of his loyal and faithful followers that acted as if I had just blasphemed a god. They, of course, couldn't imagine a show without him singing...they know that his voice is a bit "rough" but that didn't matter to them. Well, let me tell you. The voice isn't "rough;" the voice is shot, and it is embarrassing to listen to. When he went into a medley of great songs from his great albums, I wanted to slit my wrists. As someone put it, "who wants to hear ‘Donke Schoen' being sung by someone who sounds like they're doing a bad Louis Armstrong impression." I don't want to be mean...but really, have you heard yourself lately? It is a shame...and it also makes me angry. Wayne Newton could be doing a show about his life that would be a blockbuster. It would be so easy to create a production with him telling a few more stories, playing a few more instruments, and showing a few more videos...hearing him acknowledge the troubles he has with his voice, tell us about some of the trials in his life. It could be a new show with an enormous new life... We (the public) were promised a completely new show with the opening of this one, but we didn't get it. There are new elements, and I'm sure that if feels completely different to the performers, but because there are so many of the standard sequences in the show, it plays very much the same as the basic show that we have been watching for more than a decade. Wayne Newton has a loyal, but aging following, and they will love him no matter what. As much as they say that they couldn't imagine a show without him singing, they would be the first to embrace him for his bravery and courage if he admitted that he couldn't sing any longer. And the payoff could be huge. It would be the opportunity to gain a new following from a younger generation that hasn't been exposed to a true and legendary talent like Newton. They could finally see what really makes a headliner a force with which to reckon...but not if he sings... If he sings, then he is just a joke to this new generation. Whoever is advising Mr. Newton on this new show is giving him bad advice. This production will never be respected or praised by any legitimate reviewer. They may be kind about the show because of who the man is, but it will never be considered a good show. It is a shame...a strong and brilliant show about and by Wayne Newton is very attainable. I don't want "Once Before I Go" to be the swan song of Wayne Newton. The show isn't a good enough tribute to a man that is truly a legend in this town. Wayne Newton is a wonderful person and is synonymous to Las Vegas. He deserves better.