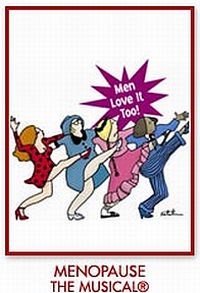 NOTE: Now playing at Harrah's
Menopause the Musical is playing at the Shimmer Cabaret inside the Las Vegas Hilton. Inspired by a hot flash and a bottle of wine, writer/producer Jeanie Linders created the show as a celebration of women who are on the brink of, in the middle of, or have survived "the change." Since its first performance, the show has evolved as a "grassroots" movement of women who deal with life after 40 and all the challenges that result in the mental, physical and spiritual freedom of over 38 million post WW2 baby boomer female.

Four women at a Bloomingdale's lingerie sale with nothing in common but a black lace bra and hot flashes, night sweats, memory loss, chocolate binges, not enough sex, too much sex and more. A joyful parody of 25 re-lyricized classic baby boomer hits, the 90-minute show features such chart-toppers as "I Heard It Thru the Grapevine; You No Longer See 39" and the disco favorite "Stayin' Awake! Stayin' Awake!"

"When I launched MTM," said Linders, "I was asked if I am the person letting menopause out of the closet. "Of course not!" was the reply...people feel this way because I have always been so vocal about hot flashes and night sweats. But what I have come to realize is that this is a stage in the lives of women my age that, in reality, is still in limbo. Most women know intuitively every other woman is experiencing the memory loss or night sweats or hot flashes. They talk about it with their friends and, on occasion, with their spouses. But, when they're in a theatre with women all shouting 'that's me!' then they know what they are experiencing is normal. They aren't crazy; they call it a 'sisterhood'."

The show at the Hilton is performed by two casts of talented performers. The show that I saw included: Vita Corimbi, Satomi Hofmann, Skye Miles, and Laura Lee O'Connell. The other players include: Susan Beaubian, Paige O'Hara, Cheryl Spencer, and Marsha Waterbury. I am looking forward to going back and seeing the other cast.

The show was utterly delightful---especially if you're in or around that age group that is, has, or will go through menopause. It's fun for the men as well...we know what we've been experiencing, and it's nice to share the misery. If you're not in or around that age group, then you may appreciate the voices and the acting, but what is fun is the relationship to reality, and that may be missed by the younger crowd.

The voices are great, and the song parodies are clever. Each of the performers is adept at their craft as both singers and actors. You very quickly like these characters and care about them. It is a fun show, and it is definitely worth your time to check it out.