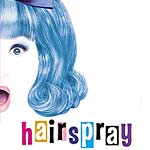 "Hairspray" is now playing in the Luxor Theatre inside the Luxor Hotel & Casino. Based on the 1988 John Waters’ movie, this story was turned into a musical in 2002 with tryout performances in Seattle and then an opening on Broadway in August of that year. The show became a huge hit, winning eight 2003 Tony Awards, including Best Musical. It has now come to Las Vegas. It is the latest of several shows that is bolstering Vegas as the new "Broadway West." The "Vegas-version" of the show is performed in one-act and approximately 90-minutes long...and it is wonderful. The show is a delight from top to bottom, and is a wonderful addition to the plethora of productions in this town. The show is set in Baltimore in 1962. The 50’s are out and change is in the air. Tracy Turnblad is a big girl with big hair and a big heart. She has only one passion...to dance. She wins a spot on the local TV dance program and begins to win the hearts of the audience, but she would also like to see the show integrated, and the conflicts begin. Katrina Rose Dideriksen does a superb job as Tracy. She makes you like her as soon as you see her and hear her. Currently, the brightest spots of the show are Harvey Fierstein and Dick Latessa. They are Edna and Wilbur Turnbald respectively--the parents of Tracy. Both Tony award winning performers and originated these roles on Broadway. The celebrated duo have been signed on to star in "Hairspray" for the first 12 weeks. The Luxor Theatre is a great space for this production. The showroom is comfortable, well appointed, and beautiful. The show has great lighting, good sets, and wonderful costumes. As more and more Broadway musicals come to our town, the entertainment gets continually elevated---whether these are shortened versions or not. The entertainment just gets better. The songs, voices, dancing, and staging are great. The band that plays is terrific. There is nothing to criticize. It is a great show.