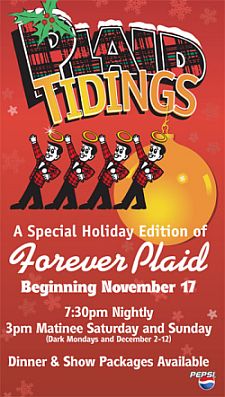 "Plaid Tidings" is playing for the holidays in the showroom at the Gold Coast hotel & casino. This show is the holiday version of "Forever Plaid" and is a wonderful treat for anyone that wants to be in this joyous seasonal mood. The "Plaids" are a quartet of singers that died, went to Heaven, came back to do a concert, went back to the cosmos, and are now back on earth to do another show---which, of its content, they are unsure. The exposition may sound a bit convoluted, but everything is made very clear and palatable in the production. In the Playwright’s notes in the program, Stuart Ross expresses that he was resistant to create a holiday show on "Forever Plaid" because it just didn’t feel right, but when he was approached, it was just after 9/11, and we all needed a little extra joy in our lives. He wanted to give back to the communities that had been so welcoming of "Plaid" over the past decade. Many parts of the production were written specifically for this show in Las Vegas. Ross hopes that this show will put a little holiday cheer in everyone and help them appreciate all of the good stuff that is always around us. The work that has gone into this show is terrific and Ross should be very proud of the achievement. The cast is amazing. Douglas Frank, Bruce Ewing, Mark Perkins, and Dale Sandish were all top notch in their roles. While each of them sings incredibly tight harmonies, they all were able to truly define each of their roles and give a strong sense of individuality to their characters. I applaud them all. Two musicians accompany the Plaids...Ken Seiffert on Bass and David Kancsar on piano. It may seem like a small orchestra, but they were able to fill the space and prove that they were all the orchestra that was needed. The showroom at the Gold Coast is a nice intimate space that served this production well. It is one of the last small showrooms in town and has become a unique gem in a city were more is more. Las Vegas actually needs more of these types of showrooms. Now granted...if you have seen "Forever Plaid," you’ve pretty much seen "Plaid Tidings." It is the same form and format, just with different songs, and it does seem to take them far too long to "get" their purpose for being sent back to the planet, but all of these little quips fade quickly when the characters start to sing. "Plaid Tidings" is a fun show, and it is good for the entire family. It is one of the few moderately priced productions in town and certainly a treasure to be cherished during this (and hopefully future) seasons.