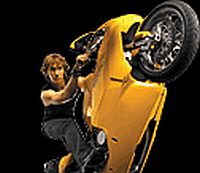 Curtis Adams: Magic that Rocks is playing at the Plaza Hotel in downtown Las Vegas. It is an attempt at making a magic show hip with an infusion of dancing and rock and roll. Adams has a good idea, but the execution falls short, and leaves the audience with a disappointing performance and dashing what would have been high hopes for the future of the Plaza and entertainment in the downtown area. The Plaza was the crown jewel of downtown in the early seventies. Its showroom was the premier place to play for any headliner or show. Even now, the showroom is a wonderful place—rich with history and ambience. I have long awaited a show that could be installed that could bring back some of its glory, and set it on its path to former greatness. When I first heard about the Curtis Adams show, I thought that this could be the beginning of something great…the show simply had to be good. Having seen the show, I know that this is not the production that’ll bring greatness back to the Plaza. In fairness, Adams has a good idea. The world of magic could use an infusion of something a bit more hip. The dancing and the rock soundtrack are good ideas, but the magic is old hat. Adams is a prop magician—simply put, the apparatus does the trick, and he presents it. There are many great prop magicians, but it takes an incredible amount of style, presence, and panache to pull it off, and Adams doesn’t quite have it yet. Additionally, the tricks as the centerpiece of the production just don’t cut it. We’ve seen the theme and variation of these tricks many times before. Adams would be much better off selling us a dance show that has magic, rather than a magic show with dancing. The emphasis is in the wrong place because the magic is not the strong point of the show. I like the idea. I like the concept, and I hope that the show can get on track. The downtown area needs a show that could be the centerpiece of the area, and a show at the Plaza would be the place to have it. Curtis Adams’ show does have a lot of good things about it, but it does need a major re-working if it is going to fulfill these hopes. I feel that I have been harsher on this show than I should have been…it is because with high hopes, a high amount of disappointment ensues when those hopes are not achieved. It is a decent magic show for people that have not seen much magic, and it is a good first attempt at bringing in a major show to the Plaza. I hope the show can change so that it can grow.