Review Of Laugh Out Loud with The Scintas

Laugh Out Loud with The Scintas (CLOSED) 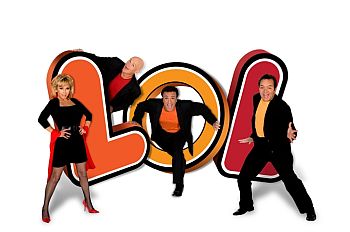 After seven years in Las Vegas, The Scintas are back at the Las Vegas Hilton performing in the same space in which they started, and their show has been retooled, updated, modified, and now titled, "Laugh Out Loud with the Scintas." The show, and the family of entertainers, is brilliant. With a genuine appeal to audiences of all kinds, the Scintas are one of the city's best productions combining music, comedy, and impressions with tremendous heart. The Scinta’s ability to entertain and create laughter has made them popular, but it is their talent that has truly set them apart. The new show takes this talent and hones and compresses it into a fast-paced evening filled with laughs and fun. The Scintas (pronounced Shin-tahs) are a family of musicians, impersonators, and comedians that has endeared themselves to the city. The show features a lot of wonderful elements that fill the space with a lot of laughter and fun. The show never ceases to keep us entertained as they move from one number to the next. Not only does this group make us laugh, but they also have the ability to touch our hearts with their stories, allegiance, and songs dedicated to the strength of family. Family bonds tie this group together. Frank, Christine, and Joe Scinta are siblings, and are joined by Peter O'Donnell, the percussionist, and now of course, an honorary Scinta as well. The interplay between these players is so spontaneous and comfortable that it would certainly take a lifetime of learning. O'Donnell holds his own within this family group; of course he has been with the Scintas for many, many years. Frank Scinta is the cornerstone of the performance, though. He has the ability to play a wide range of musical instruments, and he has a stronger and larger range of vocal stylings. As an impersonator, Frank rivals the talents of Danny Gans---seeming to do an equal number of different personalities both speaking and singing. I could easily see Frank as a solo act, but from the stories that he shares, one knows that he would never leave his brother and sister hanging. Joe Scinta has his own range of impersonations and characters--primarily sticking to the more extreme types, i.e. Jerry Lewis, Joe Cocker, and Mick Jagger. His Jagger, though, is extremely funny and bordering on the brilliant. I thought I had seen all that impersonators could do with Mick Jagger...and then along came Joe Scinta. Christine Scinta is the rose among the thorns. She has a beautiful voice and appearance. She brings a charm and a grace to the stage, and allows the performance to have a much broader range. We get to see more of Christine in this production than in past ones. She is featured as a much sexier personality with a lot of updated music. Finally, there is Peter O'Donnell. Peter is the "Token Irishman" in this good Italian family, and this family is lucky to have him. He joined the group by just filling in one night and has been "filling in" for the last fifteen years. As the percussionist, he certainly adds all of the rhythm and beat to the performance, but more importantly, he acts very much part of the family with his own brand of humor and wit. The Shimmer Cabaret at the Las Vegas Hilton seems to have been made for them. Through all of the years that I have seen them, and in all of the different venues that they have played, the space at the Hilton has always been my favorite. It is just the right size for their production and offers a wonderful audience/performer relationship. The new show is produced by Asient Entertainment, which is a brand new company in Las Vegas, and is making themselves a force with which to be reckoned. It is not that unusual for a show to get a standing ovation at the end of the production, but to have the audience stand and applaud several times during the show is truly amazing. We love the Scintas. They have become part of the Las Vegas community, and we like having them here. The Scintas make for a good evening of entertainment. It is filled with fun and laughter, and this family is a great example for every family.

Official Web Site for Laugh Out Loud with The Scintas