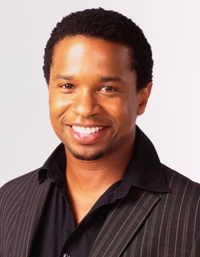 Delisco is playing at the Shimmer Cabaret inside the Las Vegas Hilton. Delisco was the winner of the E! Entertainment reality show, "The Entertainer," hosted by Wayne Newton. The concept of the show was to find the next Las Vegas headliner and out of 30k hopefuls, Delisco got the nod from Mr. Las Vegas himself, and won a headlining contract at the Hilton. I must applaud Mr. Newton on his choice. Delisco puts on a great show, and he truly has all of the makings of a star. As soon as he comes on stage, you immediately like him. He has that special personality that exudes magnetism and warmth. Coupled with that is his voice. His voice has an incredible range, clarity, and is a joy to which to listen. Delisco seems to possess a great depth of talent. He sings, dances, and has the presence and charisma to make you stand up and take note. His show is exceedingly well crafted. He has covered all of the right bases and inserts all of the right songs in the right places. Having sat through a multitude of badly crafted shows, this is no small feat. It makes a huge difference. His show mixes old songs, new songs, and some original songs for a wonderful collage of music. Delisco’s patter and stories about his youth and how he got interested in singing are charming and endearing. The band that backs Delisco up is top notch. They really fill the showroom with life and make the music come alive. The large number of musicians, though, on the small stage in the cabaret looks awkwardly crowded. As you watch them, you’re almost afraid that one of them might fall of the set. The show was originally scheduled to be in the main showroom, but the decision was made to move the show into the smaller room. Though it may have been a bit disappointing to Delisco, it was the right decision. He show fills the cabaret wonderfully. It would have been swallowed whole in the larger space. I applaud and congratulate Delisco. Having coming from the reality show world, some of us critics went in with a bit of an attitude, but Delisco has assuaged any of those misgivings and has proven that he is a delight to watch and to listen to. I hope that his show catches on. He truly can be "The Entertainer."