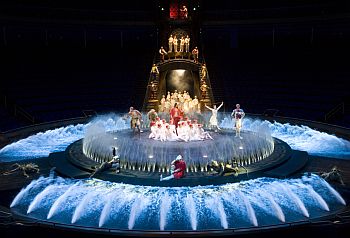 Playing at the Wynn Resort, "Le Reve" is a breathtaking experience. It is filled with awe and wonder, and it is one of the premier production masterpieces of the city. The show has just celebrated its fifth year anniversary, and it felt like it was time to look back on its growth and development and try to gain some perspective on both its past and its future.

From the first time I saw the show, I was a fan. It had gone beyond anything else in the city, and it showed an artistic growth that was stunning. Created by Franco Dragone, this show is an amazing adventure into a surreal avaunt guarde world that is stunning, dynamic, sensual, and thrilling. The vocabulary doesn't seem to exist to describe the beauty and the atmosphere created by this production. The cast is exceptional. The theatre is stunning, and the music is outstanding.

The show opened on May 6, 2005, and it didn't get off to the best beginning. Asked to open at the same time as the hotel, it was presented to the public before it was really ready to begin, and it suffered from the inevitable comparisons to "O"-a well seasoned and proven production. Most of Dragone's shows have had substantial time for previews. "Le Reve" did not, and subsequently did not receive the best press from the start. In order to re-work the production and make the needed changes, the number of shows per week was reduced. The general sense from the public was that they wanted to wait and see a finished product rather than pay full price to see a show while it was still in rehearsals. Word on the street has been fairly poor, but that changed very quickly, and hopefully it has overcome its raw beginnings, because the show is just brilliant.

Are there striking similarities between "O," "Mystere," and "Le Reve?" Of course there are. They were all created by Dragone. Why wouldn't there be? The point should be though, that as Dragone has created each of these productions, he has been able to refine the process and the vision, and he keeps getting better. Even the titles of the shows seem insignificant- they are almost all interchangeable. It is the progress of the work that is consequential, and this show has become a masterpiece. The truly best experience that the city would have to offer is to see these three shows one night after the next in sequence...If you watch "Mystere," then "O," and the "Le Reve;" the perspective is exceedingly unique as you watch the growth and development-artistically, mentally, and emotionally; and you suddenly see why "Le Reve" is this zenith of achievement of which I profess.

More than 250 cast and crew work on Le Reve each day. Thirty-two performers and 57 technicians and production staff have been with the show since the very beginning, for more than 2,200 performances. 1,320,000 towels have been used, 28,080 red tango shoes have been repaired and some 114,400 loads of laundry have been done - just a portion of the work involved in keeping Le Reve running so smoothly for five years.

The Artistic Director of "Le Reve" is Brian Burke. He has been with the show for four and a half of its five years, and he has been both the guardian of the vision and the guide into the future for this production. "Every aspect of this production was designed to work together...the script with the love story in relation to the Dreamer, the sensuality, the warm romantic feeling...we even wanted to involve the feeling of the hotel in the production."

The show is one of the most sensual productions on the Strip. "The show is based on love and sensuality," says Burke, "and it was part of the original concept, but it has developed and has come out of the performers. It is also a very human show...we did not want the audience to watch technology; we want them to see the people and have an emotional connection."

Since the show opened, there has been a continual process of growth and change; I asked Burke if he ever felt that there would be a time when he felt that his task would be complete. "I see the show as a living, breathing piece of art. The growth and change keeps is alive and keeps it interesting for both the audience and the performer. It also creates fragility in the piece. There is no complacency in this show."

This unique world emerges as soon as you enter the performance space. The theatre is superbly crafted to encompass the audience. You get the sense of being part of this experience as it occurs all around you. It supports several levels of multimedia effects that enhance the experience. Like the work itself, it is complex, layered, and beautiful.

The biggest change to the production occurred when Steve Wynn bought out Franco Dragone's interest and took over personal control of the show. The technical upgrades and changes that Wynn has made are well thought out and executed. They are a great addition to the production.

There are three levels of seating in the theatre...Splash Zone tickets at $99, Premium Seats at $129, and the VIP Indulgence Package at $179. Now, I have sat in every section of the theatre, and every seat offers a good, unobstructed view of the action, and each has its own qualities. With that said, my least favorite seats are the Premium seats...why? Because these are the least unique seats of the entire theatre...they are "fine"...they are the average view that most people expect in a production. I actually like the Splash Zone seats far more...these seats bring the performer/audience relationship to a new level of involvement. There is a connection with the performer, the theatre, and the performance itself...it is tactile and sensual experience that engages you...you can feel the performance and smell the water...it is unique. Many people are put off by the words "splash zone." This is really somewhat of a misnomer...yes, in this "splash zone" you may get a sprinkle or occasional drop of water; it is not, however, like being in a "splash zone" of an amusement park where people are soaked, and the relationship to the performance certainly out-weighs the random sprinkle. One of the other changes that was made was the addition of a new theatre seating area...the VIP Indulgence Package is a new and wonderful way to experience this show. The package includes overstuffed chairs with lots of leg room, champagne, strawberries, and a server that was so adept at keeping glasses filled that we nicknamed her the ninja-waitress. It also includes a "Privilege Access Pass" for food and beverage outlets at Wynn Las Vegas. The pass provides holders with a line pass, complimentary admission and priority access to reservations and/or seating at the dining and nightclub establishments on day of performance. There is also a video screen that rotates through different views of the production...before the show, we are given backstage views of performers getting ready, and during the production, and the screen flips through overhead and underwater views of the show. It lends to a Busby Berkley feel to the evening that is really interesting. You are sometimes torn with the visual overload with which view to watch, but it is a great addition, and part of me never wants to see the show in any other way.

Several of the sections stand out...the "red shoes ballet" and the "girls in the globe" immediately come to mind. There are several other sections of note as well. There were of course other sections that I didn't care for as much, but it is really a matter of taste, and the areas in which this show triumphed certainly outweighed any complaints that I might have. The show is incredibly sensual, and the cast makes the complexity of the production look simple. It is an intriguing celebration of metaphors, similes, symbolism, and images.

It is unfortunate that "Le Reve" got off to an inauspicious beginning. It is a brilliant show. They are fortunate that the Wynn Corporation has always stood behind them. It deserves lauds, praises, and accolades. I can't wait to go back...again and again. Like I said before, from the beginning it has been one of my favorites.