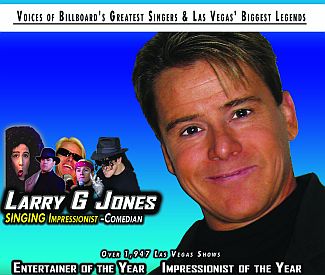 Larry G. Jones is playing at the Royal Resort (right next door to the Greek Isles.) He is an impersonator---often referred to as "The man of 1002 voices." He is exceedingly talented, has an incredible range, and makes the time fly by with his whirlwind of impressions. Larry has earned the highest of accolades from the press and the public. He has performed over 1,400 shows as a Las Vegas Headliner and countless more as an Emcee, Corporate Entertainer, and live vocalist. He's also performed at major theme parks and State Fairs, and been an emcee for major events. He has put together a show that is not only clean but very funny and entertaining, as well as truly vocally amazing. ...So why have most people never heard of him?

Larry's voice has been heard by millions around the world, on radio, TV, live stages, and by well over 100,000 people at his show in Las Vegas! Larry's ability to be a chameleon with his voice, and his love of performing on the stage, led him to Las Vegas after 14 years as a studio and live vocalist. Soon after moving to Las Vegas, he was headlining in his own one man singing Headliner Comedy impressionist show, 'One Man, 1000 Voices,' where he had a successful run of almost 2 years straight. ...So why have we never heard of him?

The career of Larry G. Jones is a frustrating one to me... He is a great guy. He is very nice. He is exceedingly talented...gifted in fact...possibly the best impressionist in Las Vegas. I have seen his show numerous times over the course of several years, and I have always enjoyed watching him work...and he is always tucked away in some no-name lounge, fighting to grab even a handful of audience members with little or no support for marketing or advertising. I had never even heard of the Royal Resort prior to seeing his show there...but there it was...and Larry's space was a curtained off corner of the bar area. Larry is a great, hard-working performer that has never gotten that big break...and he keeps at it...keeps plugging away...always getting better...and always hoping.

He is now the man of "1002" voices, and more than anything, he needs people to go and see him. If you see him, you will be delightfully surprised. You will be shocked that there is talent like this that remains unacknowledged in this town...and maybe, finally, the right people may see his show and really give him the break that he deserves.

An inspirational aspect of Larry and his career is the fact that in 1998 he was diagnosed with an advanced stage of malignant melanoma that appeared in his lymph nodes...and given 6-12 months to live. After surgery and chemotherapy, Larry flourished. In 2004, he drowned after rescuing two other people...he was revived by CPR...He's survived death, but he can't seem to land a decent room.

His talents and abilities are a strong rival to any other impressionist in Las Vegas. Jones has a masterful ability to manipulate his body, his face, and his voice. His routine gives us a fast paced and delightful romp through musical history, and we relive the times by hearing our favorite artists. He has the ability to do both male and female voices, and the duets that he does with himself are incredible. His finale is a song utilizing the voices of the entire Rat Pack. It would be really interesting to see what he could do in a better showroom and a band to back him up.

For additional information about him and his show can be found on his website: LarryGJones.com