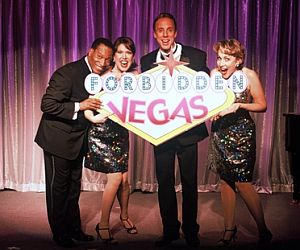 "Forbidden Vegas" is now showing inside showroom at the Westin Hotel just off the Strip. It is an incredible spoof of the entertainment that we hold near and dear to our hearts in this city. It is a show that allows us to laugh at ourselves and see all of our entertainment in a different light. The music and comedy are wonderful, and the talented cast makes every scene a delight.

The show comes from the producers of "Forbidden Broadway," which was first seen at Palsson’s Supper Club on New York’s Upper West Side in January 1982. An unemployed actor, Gerard Alessandrini, who wanted a showcase for his talents, started the production. He decided to assemble some of the musical parodies of Broadway shows he had written since childhood into a nightclub act. Critics and audiences were wowed, and it has since become New York’s longest running musical comedy revue.

The same creative genius behind "Forbidden Broadway" and "Forbidden Hollywood" now takes his unique talents to the "Entertainment Capital of the World" with the launch of "Forbidden Vegas." From Celine Dion to Wayne Newton; "O" to Mamma Mia! --- All is fair game as the incredibly talented "Forbidden Vegas" troupe of actors takes on the glitz and glamour of the Las Vegas strip.

With its unique formula in the mix, "Forbidden Vegas" promises unparalleled entertainment while encompassing Las Vegas and its round-the-clock entertainment.

The cast includes Carter Calvert, who was a member of the "Forbidden Broadway" team before joining the cast of "Forbidden Vegas."

Valerie Fagan comes to "Forbidden Vegas" directly from the New York cast of "Forbidden Broadway." Valerie is the published co-author of the award-winning musical "Six Women with Brain Death," described as ‘hilariously funny’ in its recent UK premier at the Edinburgh Fringe.

Kim Douglas Steiner, musical director, is honored to be the musical supervisor of "Forbidden Vegas." He is also the current music supervisor of the long running musical, I Love You, You're Perfect, Now Change."

The entire cast is incredibly talented and diverse, and most wanted to come to Las Vegas as the current buzz in New York is that Vegas is the place to be.

The showroom at the Westin is an odd little space. The seating and the sightlines are awkward, but it serves the show.

If you love the theatre or Las Vegas in general, this is a great show to go and see.