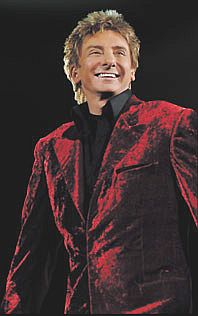 Barry Manilow is playing in the showroom at the Las Vegas Hilton. His production, "Music & Passion," is destined to become a staple in the "must-see" show category in Las Vegas. Barry Manilow's unparalleled career is made up of virtually every facet of music, including performing, composing, arranging and producing. A 2002 Songwriters Hall of Fame Inductee, Manilow has triumphed in every medium of entertainment. He has received Grammy, Emmy and Tony Awards and has been nominated for an Academy Award. Years ago, Rolling Stone magazine proclaimed Manilow "the showman of our generation." If ever an entertainer embodied that accolade, it is indeed Barry Manilow. The show at the Hilton is a marvelous production. It includes several magical and memorable moments, which uplift the audience, and propel the show forward. Barry Manilow is a wonderful performer. His voice has matured, but it is still in top-notch form. He is incredibly charismatic and creates a great relationship with the audience. Based on industry charts, he is the undisputed Number One Adult Contemporary Artist of all time, and his record sales exceed 50 million worldwide. Even with that, there are a lot of Manilow jokes out there, and he fully acknowledges them. It is fun and delightful. Barry has consistently been one of the most successful artists in the music industry, and he seemed extremely happy to have this resident show in town. "I am a musician. My passion for music has obliterated everything in its path for my entire life. Whenever there was a choice between music and anything else, music won hands down every time. No one person or material thing could ever come close to the feeling I get when the music is right. I am totally committed to my music and my fans," says Manilow, and all of that comes across in his performance. The orchestra and the back-up singers are the best in the business. The charts and arrangements they play make the sound complex and rich, and fill the showroom with beautiful music. There are a couple of odd moments in the show. Transitions between elements are still a little rough, but those things will work themselves out with a little time. The showroom at the Hilton is a legendary place. It is the house that Elvis built, and it is one of the premier showrooms in town. There could not be a better match for both singer and space. The latest tendency in Vegas toward having resident headliners is certainly enhanced by Barry Manilow. He is delightful to which to listen and watch, and we already hope that his contract will extend beyond the one-year term.