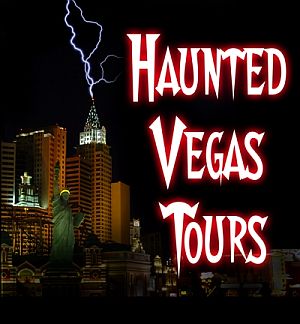 The Haunted Vegas Tours takes off from the Greek Isles Hotel & Casino. This spirited and spooky ghost tour will take you to the haunting grounds of Bugsy Siegel, Liberace, Redd Foxx and Elvis. Robert Allen, creator of Haunted Vegas Tours now makes it possible to visit such eerie sites by offering a guided Tour and Show, featuring Sin City's Darkest Ghostly Secrets. A small show prior to the actual tour accompanies the evening of entertainment---a small show that could easily have been left out of the night. According to Allen, who consulted with Tim Cridland, a paranormal historian and Janice Oberding, author of the book "Haunted Nevada," there are more than 21 places where paranormal activity has been documented in Las Vegas. The tour covers such sites as the "Motel of Death," where numerous celebrity deaths have occurred, and the former home of Las Vegas legend, Redd Foxx, where his ghost continues to haunt despite numerous attempts to exorcise it. The tour, hosted by Allen, is a fun and interesting journey. Allen’s extemporaneous telling of the stories that accompany these sites is enjoyable and engaging to which to listen. A long time resident and performer in Vegas, Allen does a great job. The admission includes the show, "Haunted Vegas" at the Greek Isles Hotel & Casino. It is a sideshow that is not worth or worthy of the time put into it. I can understand the desire to warm up the crowd with a small performance, but this was not a good match for the tour. The show includes a person eating glass, laying on a bed of nails, and a man lifting a bowling ball with his penis. I came to see a tour of "haunted" Vegas with stories and history about the paranormal, not a sideshow. Additionally, the tour lasts for a good couple of hours-- they don’t need the sideshow. It truly diminished the evening. The point is made that each of these sightings is legitimate and documented in many ways. None of the stories are made up. It is informative and interesting---whether or not you believe in ghosts, it does leave you with a lot to wonder about. There is both General admission and VIP admission---don’t waste your money on the VIP ticket--- you get the same show. I enjoyed the tour of the "Haunted Vegas Tour" show. It is interesting, engaging, and it’s a lot of fun to tour the city and hear the ghost stories. I did not care for the pre-show. The tour stands by itself. I would suggest that you arrive twenty to thirty minutes late and be spared that portion of the evening’s entertainment. For information look up www.hauntedvegastours.com