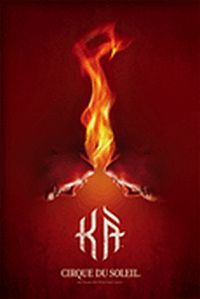 KA is playing at the KA Theatre inside the MGM Hotel and Casino. It is the latest show from Cirque du Soleil to hit the Strip, and it is an amazing technical achievement. A departure from previous shows, this is a piece of theatre that tells a story. KA combines martial arts, acrobatics, puppetry, interactive video projections, technology and pyrotechnics to tell the epic saga of Imperial Twins---a boy and a girl---who embark on an adventurous journey to fulfill their destinies.

KA is created and directed by acclaimed theatre and film director Robert Lepage. Lepage ("Bluebeard's Castle," "The Far Side of the Moon") describes the story as "the coming of age of a young man and a young woman through their encounters with love, conflict and the duality of KA, the fire that can unite or separate, destroy or illuminate." The Twins' journeys take them through a succession of challenging landscapes and ever-changing performance spaces that conjure an entire empire on stage.

As the plot of KA unfolds, danger lies in wait for the Twins at every turn. Archers and Spearmen hunt them relentlessly. As the villains give chase, the artists show off their climbing prowess with an incredible ascent to safety. As a distraction from danger, the Twin Brother learns the art of shadow puppets in a tender, yet poignant moment. The action resumes during the Pillars scene, where artists perform daring acrobatic maneuvers while leaping on and over multiple pillars.

The Twin Sister, protected by her Nursemaid, manages an escape in a miraculous man-powered flying machine, releasing her into a surreal forest populated with bright, luminous creatures on Bungees and Swing Poles. Meanwhile, in the Archer's Den, captives perform on the Wheel of Death with breathtaking displays of gravity-defying feats. In the culmination of the Twins' extraordinary journeys, a battle takes place on an enormous vertical stage offering a unique aerial perspective. Video projections react to the artists' touch while the adversaries spin through the air in a stunning display of perpendicular acrobatics and aerial adventure.

The show's title, KA, is inspired by the ancient Egyptian belief in the "ka," an invisible spiritual duplicate of the body that accompanies every human being throughout this life and into the next.

The show is an amazing achievement of human ability and technological advancement. It is beautiful and awe-inspiring. The incorporation of the acts into the story is sometimes a bit forced, and the pacing seems dreadfully slow at times, but these are minor quips within the major achievement of this show.

The performers are wonderful. Many of them seem to possess superhuman abilities...and that is even before the incorporation of the aerial work. They often appear to be working on the edge of disaster, and the controlled chaos is great to watch.

The theatre and the stage are astonishing. The budget for the show ballooned enormously, but it seems that it was ultimately all well spent. The theatre is large, but good attention was paid to the seating so that there are no "bad" seats.

KA is a wonderful experience, even though it feels a bit long at times. The most discerning of palates, as well as the entire family and children can enjoy it. The shape of entertainment in Las Vegas is changing and advancing, and Cirque is on the forefront of this new wave in the theatre. Many believe that there are too many Cirque show in town, but let's face it...they do produce brilliant shows.