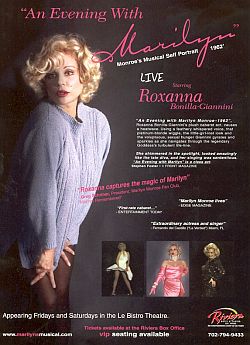 "An Evening With Marilyn" is playing at the Le Bistro Lounge inside the Riviera Hotel & Casino. It is an interesting look into the life of this personality. Roxanna Bonilla-Giannini has written, directed, produced, and is starring in this one-woman production. She does a fine job. This show, however, is not a strong show for the space or the city. It might do well as part of a regional or resident theatre project, but as part of a Las Vegas production, I feel that this show is destined for failure. It is a shame because this is a viable piece of theatre...just not here. Roxanna's professional career in show business began at the age of 13 years when she landed the role of Snow White in the internationally acclaimed "Disney On Parade" which toured the United States and Mexico where she performed with 184 dancers. She had a co-starring role in the popular film, "9 to 5", starring Jane Fonda, Lilly Tomlin and Dolly Parton. More recently, she wrote, produced and starred in the feature film, "La Negrita" - a film of love and faith shot in the rain forests of Costa Rica. In 1998, Roxanna Bonilla-Giannini, conceived a new show for herself, which she has written, produced, and directed, "AN EVENING WITH MARILYN MONROE-1962", a one-woman musical cabaret. Only a few days before her untimely death, Marilyn, will take us on a journey into her own life, from the time of her birth through her childhood, triumphs and tribulations and towards a promising and bright future. The story unfolds through Marilyn’s own words, the presentation of rare photographs and 24 beautiful songs, many taken from her various movies by Gershwin, Styne, Arlen, Porter, and others, sang and danced in Marilyn's unique playful sweet, and sensuous style - an intimate portrait of the woman behind the image, behind the myth. The Le Bistro Lounge is a rent-a-room space where anyone with the money can have their very own Las Vega show. This has been a bad deal for a lot of performers in this town that have deluded themselves into thinking that they have a following and can simply fill the room if they tell their friends where they are. The biggest mistake being that, while they have the money for the rent, there is no money for advertising and marketing...so no one knows that the show exists and it dies a slow death while sapping the funds and savings of the performer. I would hope that Roxanna Bonilla-Giannini has exceedingly deep pockets or a strong marketing plan in the works...but even at that...this is the wrong show, in the wrong space, in the wrong town. Both she and the show would be much better served if they put their money into getting this show onto the resident theatre circuit. The show is a good effort. It would be nice to see it flourish...somewhere else.