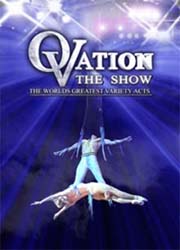 "Ovation" is now playing inside the Ovation theatre at the Lady Luck Hotel & Casino. It is a show of variety acts that moves along quickly and is a lot of fun. There are acts to amuse, thrill, amaze, stun, and laugh. There are, apparently, so many variety acts in town looking for work that multiple shows can be created just from these acts. It is a great concept that has really taken off, and if you don’t like what you see, then all you have to do is wait ten-minutes. Variety acts have traditionally been front-of-curtain act breaks to give the audience something to watch while the main show gets a break or manages some huge set change. The main goal of the variety act is to quickly engage and capture the audience for a ten-minute amusement. Most of these acts have always been a side note to the main production, and the idea of creating a full show of these acts brings about a production that is always engaging, fast paced, and fun. "Ovation," and its counterpart, "V," follow the same format---a host entertains us and brings out one variety act after another. Each act shows some skill, craft, talent, élan and all are entertaining in one way or another. Both shows have done a great job at finding and putting all of these acts together. A lot of entertainers have been put to work because of these shows. Each of the acts are comprised of performers with great skill, and we are amazed by their abilities, but the acts seem to be so randomly put together that the show feels very uneven and a bit choppy at times. A couple of the best acts are Jason Byrne and Tino Ferreira. Byrne is a magician that offers up some wonderful sleight of hand magic. He has a charisma about him that embodies the essence of a magician. He is charming to watch and has enough personality to engage the audience. His magic routine is well put together and builds on itself throughout the presentation. Tino Ferreira is a balancing act without compare. His act, too, builds upon itself with ever increasing difficulty levels. It is fast paced and fascinating to watch. You have to sit back and just imagine how anyone could have possibly learned this skill, because it looks as if it would be truly impossible. The theatre at the Lady Luck is surprisingly comfortable. It is set up in basically a makeshift space, but it works very well for a production. I was pleased. All of the acts have something special to offer and each of them deserves their moments on stage. "Ovation" may have a few kinks to work out in the flow of the show and the particular selection of the acts, but it is modestly priced and a good entertainment value. The show deserves an audience.