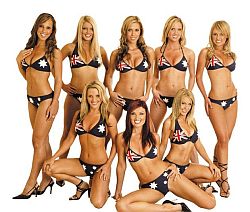 The "Aussie Angels" are playing in the Shimmer Cabaret inside the Las Vegas Hilton Hotel and Casino. They are subtitled, "the wonders from down under," and are the female counterpart to the famous "Thunder from Dow Under." This troupe of six dancers and two hosts leaves a lot to be desired. It is rarely engaging, only moderately seductive, and seems as if it is still trying to decide what kind of show it’s supposed to be. The idea of a troupe of topless dancing Aussie girls is very intriguing and seems to have a lot of potential. There were a lot of rumors, however, that there were contract issues and some of the dancers didn’t know that this was supposed to be a topless show. Whether this is true or not is still up for speculation, but the rumor is bolstered by the fact that only half of the dancers even went topless. The dance line looked odd with this mix of topless and covered dancers. It doesn’t matter what they choose, but as a company, they need to choose something. "The Fashionistas" has proved that seduction can be achieved without going topless. Therefore, whatever they choose is fine, but as a company, they just need to pick something. The dancing in the show was fine. These are all good dancers, but they are not great dancers. Each of the Angels got to do a solo number, but only a couple of them had the capacity to really carry the stage and translate the excitement of the number out into the audience. Many of the numbers had an obligatory, pull a guy up on stage bit, and make him look silly routine. The caliber of many of the numbers made you feel as if you were in a strip club that didn’t offer lap dances. The troupe is still plagued by their props and costumes. Prop misplacement and costume snags a catches abounded throughout the show. It looks like they are still trying to learn the show and figure out what elements should be in and out. They need to be back in rehearsal for a little longer. I hope that I can come back to the show when they get the kinks worked out and offer a more positive review of the production, but until then, they need work. The two hosts for the show definitely need to work on their banter. It was sophomoric at best. The Shimmer Cabaret supports this production only adequately. It is a decent size for the show, but the lighting needs improvement. Good isolation of areas was never achieved. Separation of the audience and the stage was muddled, and the color and shape of the lighting seemed random. Lighting can make or break a production, and this lighting was not helping the cause. The "Aussie Angels" has the potential to be a decent show. The cast needs to work out their problems with both their accessories and the nature of the show itself.