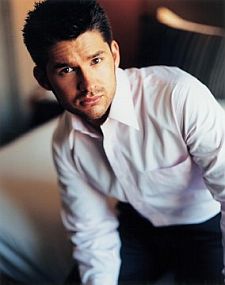 Matt Dusk is playing inside the showroom at the Las Vegas Hilton. Dusk gained a little notoriety during the filming of the reality show, "The Casino," in which he was featured as the ambitious lounge singer hoping to make it big. He has been able to parlay that exposure into a recording deal and also this stay at the Hilton, which of course, he hopes to extend into a regular gig as a headliner. The showroom at the Las Vegas Hilton is known at "the house that Elvis built," and his legacy is mentioned in virtually every show of every performer that plays there. I am sorry to say that I think that the house of Elvis is in mourning these days, as Dusk seems to butcher and botch everything that he is trying to achieve. Dusk is selling himself as a crooner of classics, with a mix of some new material. He hopes to appeal to that music-savvy audience, while also bringing new listeners into the fold. Unfortunately, between his phrasing, articulation, and projected image; he does a disservice to everyone. I understand that singers often change the phrasing in a song in order to make it their own, but the rephrasing by Dusk, not only insults these classics, but comes across as the worst example of a stereotypical lounge singer you can imagine. If it was a part of a Saturday Night Live skit, it would be funny, but trying to take it seriously is painful. His articulation is so sloppy that it comes across as uneducated. If he is paying homage and tribute to these great songs, then he needs to give them the respect and care they deserve, or he is going to alienate the very audience, which he is attempting to garner. He needs an image consultant...badly. Appearing unshaven in an ill-fitting suit that he looks like he slept in, I can only presume that he wants to project an image of a cool, hip, sophisticated musician. He is none of these things. He is a singer. He has a decent voice, but also an ego that fills the room. Rather than an up and coming singer, he comes off as someone who thinks that theyï¿½ve already made it, and we, as the audience, should just bask in his glow. His patter between songs is puerile. He comes off as a guy more interested in getting a date, than a singer trying to win his audience. I lost count of his references to being single, looking, and available. He even told the audience how to find him later if we were interested. The rest of his speaking is filled with questionable facts that make the audience question where he is getting his information. When it is time to acknowledge the band, he compares himself with the legendary, world-class bands and singers of history, and then goes off without even taking the time to introduce the band and giving us the impression that he doesnï¿½t even know their names. These are good musicians, and they do deserve their accolades. The folks at the Golden Nugget had it right during the filming of "The Casino." Matt Dusk is a lounge singer, and while the $25 ticket price for his show sounds reasonable, people should realize that they can see any number of lounge acts that are just as good or better than this for free in this town. Matt Dusk has a decent voice, but with the material that he has chosen, he needs to give both it, and the audiences that love this music, the respect, care, and honest integrity, they both deserve.