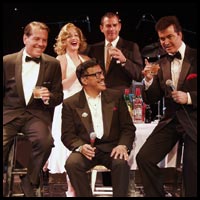 "The Tribute to Frank, Sammy, Joey, and Dean" is playing inside the theatre at the Greek Isles Hotel and Casino. This is one of the better Rat Pack Tribute shows that are currently playing in Vegas. The combination of players along with a live 11-piece orchestra is a good mix of talents that keeps the audience pleasantly amused for this evening of entertainment. Individually, these performers may not rank among the top tribute artists in the city, but they work well together, and there is a lot to be said about the comrade that is display on stage. After all, the Rat Pack was famous for their interplay and antics during their show, and bringing that to life is probably this casts greatest attribute. One of the nice surprises of the evening is the portrayal of Joey Bishop. In most of the tribute shows, he is give careful neglect, and to see him prominently included in this show is great. Joey Bishop was always in integral part of the Rat Pack, and to have him in this production points up the missing element in all of the other tribute shows. The other nice surprise is the "surprise" visit of Marilyn Monroe. Not only does this actress do a tremendous job in the role, but also her segment is a nice break from the rest of the action. It gives the production a little more depth and a greater variety. The Frank, Dean, and Sammy are all fine. They fulfill all the basic requirements of their roles, but don’t really go beyond that. These are standard Frank, Dean, and Sammy characters. They stick to the fundamentals, but don’t give us anything truly unique. You could go to just about any other bar/lounge that does a tribute to one of these artists and see the same fare. The orchestra is the best element to the show. There is nothing like a live orchestra to give depth, dimension, and variety to a production, and these are all good musicians doing what they do best. Throughout the show, the band is engaged and engaging, oftentimes joining in on the merriment and antics. I applaud the musicians and their inclusion in this production. The Star theatre is a great space for a small show. Originally, the Debbie Reynolds theatre, it was built to her specifications for an intimate evening with some headliners. It proves to be a perfect venue for this production. The relationship between the actor and the audience is easily established, and makes for a comfortable night. "The Tribute to Frank, Sammy, Joey, and Dean" is also sometimes known as "The Tribute to the RatPack Show," and I’m not sure why the different names appear on different advertising elements. Overall, it is one of the better tribute shows. The art of the interplay and the musicians make this a good show, and one that you’ll walk away from, having enjoyed.