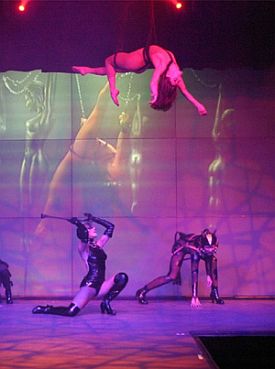 Note: Now playing in the Theater at Empire Ballroom. "The Fashionistas" is playing inside the Krave nightclub next to the Aladdin Hotel & Casino. It is based on the adult film of the same title. With a cast of amazing dancers on stage and costumes by Jose Luis Vinas, this high-energy erotic and exotic dance musical is a triumph for producer/writer/director John Stagliano. It is the sexist show in Vegas, and it isn’t even topless. It is also one of my picks for "Best Adult Show." Stagliano hit the big-time in the entertainment business last year capturing 10 Adult Video Awards, including "Best Film" out of 22 nominations with the adult film, "The Fashionistas" which runs four hours and 37 minutes. It has been a long time dream of his to produce a dance show, and this production had just the right mix of elements for the job. The production has a great cast, and these dancers are some of the most talented dancers in Las Vegas. They are exceedingly talented and execute everything with incredible ease. "The Fashionistas" has been described in its advertising as "one of the most sexually brave and erotic live performances you’ll ever see." It proves that there can be truth in advertising. It is a marvelous show. The story revolves around a young career woman in the fashion industry who becomes involved in a love triangle with her female boss and a famous male clothing designer. It’s fetish fashion. There’s very little dialogue. The concept uses music and dancing to tell the story. It is not a collection of specialty acts, but a vehicle to explore a story of sexuality. The space inside the Krave nightclub is used especially well. Though it is a small space, the way in which Stagliano has action appearing and occurring throughout the club is amazing. You feel involved in the production because you find yourself in and around all of the action. The telling of the story comes from dancing, and choreography. It is a lot easier to follow, now that they have given you the basic plot in the program. The show has faired exceedingly well since its opening, and if given the chance, should continue to grow and develop even greater depth. This is an amazing production---especially since this is Stagliano first venture into live theatre. It is smart, sophisticated and edgy, and there is a lot of comedy in the show as well. It is certainly worth the time and effort to see. I like this show.