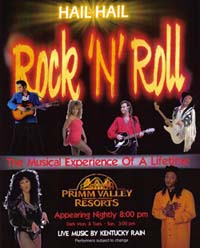 "Hail, Hail, Rock & Roll" is playing inside the showroom at Whiskey Pete’s Casino in Primm, NV. This show of impersonators was very surprising. I went to Primm, not expecting A-list performers, but I was wrong. The people in this show were wonderful, and the audience was truly thrilled. What struck me the most, however, was the overall value of the production, coupled with the value received throughout the Primm resorts, which made this one of the best entertainment values in the Southern Nevada.

The entire experience was terrific. My girlfriend and I drove down to Primm, and it was really a lot closer than I thought it would be. It took us less time to get to Primm then it normally takes me to get across town. While there, we shopped at the outlet mall; we had a fabulous dinner at the Silver Spur restaurant at Whiskey Pete’s, saw the show, gambled at tables with low minimums, spent the night, and had an easy drive back the next morning. The amazing thing about the time there; the show, dinner and hotel for the two of us was less then the price of one ticket to "O." It is a tremendous value.

The show was a lot of fun. Each of the tribute artists was top-notch. On this particular night, the show consisted of Buddy Holly, Linda Rohnstat, Jimi Hendrix, and Elvis. I got the feeling that some of the acts come in on a rotating basis since the photos for the show also included Tina Turner and Cher. So the show that I saw might be slightly different than ones on other nights, but the sense was that all of the acts would be of this high calibur.

The audience was comprised of a broad spectrum of demographics—young, old, families, and couples on dates; and each of these groups found a lot to enjoy. The performers related to the audience well, oftentimes coming down into the crowd to gives these groups a thrill.

Each of the performers was great, and while not trying to diminish any of the other artists, but my favorite was the Buddy Holly. It’s been a while since I’ve seen a good Buddy Holly tribute artist, and he was just what I needed to lift my spirits and get me into the heart of the evening.

Watching the other audience members was almost a fun as watching the show itself. The joy of performances and memories shown in the faces of many of the people around me as they listened to some of their favorite songs of the past come alive.

The five-piece band did a great job at shifting styles and genres to support each singer. They really worked well together. It is always a special treat to listen to both the singers and musicians playing live.

"Hail, Hail, Rock & Roll" is a good show, and the total package that Primm has to offer, is a tremendous value. It is certainly worth the short drive.