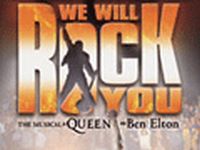 "We Will Rock You" is playing inside the theatre at the Paris Las Vegas Hotel and Casino. It is an interesting piece of theatre that vacillates between the brilliant and the inane, between terrific and terrible. This show is both wonderful and awful. I can’t decide if I love this show or hate it. I do know that I would love to give this show one more re-write and give the lead actors some acting lessons. I actually hate the fact that I am so torn about this production. I truly want to love this show, but the sad fact is that the acting of the lead characters is so abominable that I just can’t. It was a love/hate relationship, I alternately wanted to stand up and cheer, and then I wanted to stand up and leave. The show has so much potential. This show could be brilliant, but there are significant and distinctive flaws with this production. Singers were cast in the role of the leads, and the songs were great, unfortunately, the lead singers couldn’t act, which was horrific. I realize that some of the acting was supposed to be tongue-in-cheek---I get that, and to that point, the supporting actors did a wonderful job at creating these types of characters...extended personalities, commitment to extremes, and a believability. The leads were simply bad actors---great singers, but very bad actors...amateur high school bad. It was embarrassing, and it almost ruined the production. On the other hand...the music was phenomenal. Hearing the songs of Queen in this production were amazing. They were uniquely and interestingly interpreted. They were staged masterfully. The singers and dancers were brilliant. Every song was distinctive, and even though I have heard every song dozens of times before, hearing them here was like hearing them again for the first time. The band that supported the show was top-notch. They were crisp and clean throughout the show. Toward the end of the production, the band members were revealed, and we were truly able to appreciate them. They did a tremendous job. The theatre inside the Paris Las Vegas is an outstanding showplace. It is a comfortable theatre with amble room for the larger sets and has all of the technological bells and whistles to make a production fly. I hate the fact that casino executives still feel that Las Vegans and tourists should only be allowed to see a truncated version of a musical. The shortened versions generally don’t work and most close after a short run. In fact, the only musicals that have had any lasting success in this town have been the two at Mandalay Bay...which are the only ones that ran at their full lengths. Will they ever learn? "We Will Rock You" has the potential to be a blockbuster musical---keep working the music, and don’t allow the leads to open their mouths, except to sing. In its present form, it also has the potential of going the way of all of the other shortened musicals.