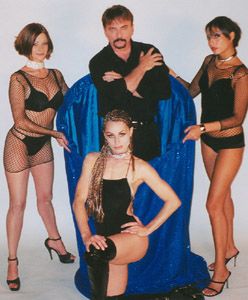 "Escape" is playing in the Le Bistro Lounge at the Riviera Hotel and Casino. It is a small, put very well put together show that combines the art of escape with some magic and music. Dixie Dooley has been performing around town for years, and is known to be a master escape artist. His work is now combined with female escape artist, Shedini. Together they are delightful on stage, and they are really able to involve the audience in their production. So many shows are run through the Le Bistro Lounge. It is a space for rent, and so anyone that has the money has the opportunity to have a Las Vegas show. Because of this, the quality of many of the productions, which have appeared at the Le Bistro lounge, have been substandard. When contacted about a new show at the lounge, there is always some reticence about rushing out and seeing it---fearing the worst. I was very pleasantly surprised. The show is being sponsored by Penguin Magic, and with the show, there are a lot of extra enticements for everyone to enjoy...like a free pair of handcuffs, a magic trick, a poster, a magic DVD, and adults also get two free drinks. Penguin Magic supplies the toys; the Riviera supplies the drinks. The greatest enticement, however, is the show itself. It is a solid hour of entertainment. Watching a female escape artist was great, simply because it is such a rarity. Shedini is very good addition the show. She is beautiful, and she is capable. The program also tells us that she was named, “Escape Artist of the Year,” (though I have honestly never heard of that distinction.) Some of the magic is a bit perfunctory, but it is still good amusement. The star attractions of the show are the escapes and the mechanisms from which Dixie and Shedini must extract themselves. The escapes are truly wonderful, and for the most part, they are done in front of our eyes...very little was covered and hidden from the audience. The Le Bistro lounge is not the best venue for the show. The stage is too wide. The lighting is generalized, and the seating is too extreme. It is just not a good match for the show---especially since band instruments for other shows in the space are left in place. It is a bit distracting. This is a good family friendly show. I hope that this production can set itself apart, and really be able to make a go of it. I would like to see this show succeed.