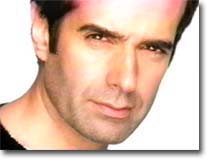 David Copperfield plays at the Hollywood theatre at the MGM whenever he is in town. Watching his show is an amazing experience---part of it is seeing the show, and part of it is seeing this man that has become, not only a legend, but synonymous with magic itself. He is the best-known magician in the world, and he is the standard by which all other magicians are measured. Reading his resume is pretty much reading the list of the greatest feats of magic ever done. He has an astounding reputation. Initially, he built his name on doing the impossible, such as making the Statue of Liberty disappear, walking through the Great Wall of China, escaping from Alcatraz, and levitating and vanishing the 45 ton Orient Express, and the list goes on and on...and while he can't bring gigantic illusions like that to this stage, he does perform other feats that seem impossible, right in front of our eyes.

Copperfield does a great job at establishing a good rapport with the audience right away. He has a wonderful charisma and style onstage that could only have been honed through years of hard work and stage time. The relaxed easiness of his personality sets the crowd up for a terrific night of magic. It additionally struck me that I never realized how funny Copperfield is. His comedy and sense of humor are great. There are definitely reasons why he has become the best and the greatest.

Watching the show made me realize just how many other magicians have tried to emulate both his style and his magic. Obviously, they recognize greatness. Having seen every other magician in town, I can recall all the times I've witnessed a theme or variation of a Copperfield illusion and delivery...and let me tell you, there is nothing like the original. Watching Copperfield is truly watching the master...and all others seem to pale by comparison.

For the most part, David Copperfield is a prop magician---which means that the mechanism for the trick is contained within the illusion itself, rather than accomplished through the use of sleight-of-hand. The prop magician sells the trick instead of doing the trick. Because of this, I've always had a tougher time enjoying prop magicians because there seems to be less "Magic." With Copperfield, however, I have taken a whole new view of prop magicians. There are certainly reasons why he has achieved his notoriety. He was great, and even though, on many occasions, I knew the basics of how a trick was accomplished, Copperfield made it surprisingly unique, fresh and a joy to watch.

And the other mark of his mastery is his ability to do his sleight-of-hand up-close to some selected audience members. The rest of us get to see the illusion through the use of video projections.

The show is helped, of course, by the wonderful support around him. The technicians and assistants are all top- notch, and the Hollywood Theatre at the MGM is one of the best facilities in town for a headliner. The show looked good and sounded good.

David Copperfield continues to show us why he is one of the top and most respected magicians out there. He is still one of the best. Whatever that indefinable "it" is--- David Copperfield has it and has never lost it. He has all of the charm, charisma, and personality that he ever did. He has the capacity to amaze and astound us.

If there is one magic show you can see in your life, make it this one.