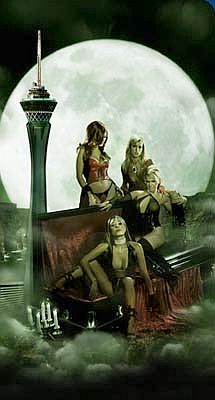 "Bite" is playing in the showroom at the Stratosphere Tower and Casino. It is the story of the Lord Vampire's search to replace his long lost Queen of the Night. The story is told through the words of classic rock & roll songs, and the actions and dancing of the cast. It is a great concept...vampires are always an interesting topic, and having beautiful topless vampire dancers is a plus as well. The show has just celebrated its fifth year at the Stratosphere, and in many ways, has captured both a cult and campy following. It has gone through several variations and is still trying to find the best version of itself. Every night, the Lord Vampire holds a party to recruit minions and seek out and find the perfect female that will be transformed into his "Queen of the Night." The main attraction at the party is his beautiful bevy of topless, dancing vamps, which seek out willing participants. As people are transformed into vampires, they are able to perform amazing feats worthy only of supernatural beings. As story is told through the use of classic rock and roll, each selection has been carefully chosen to build and relate the story to us, the partygoers. The concept is good, the dancing is superior, the acrobatics are wonderful, and the singing is solid. The greatest strides that the production has made, has been in the area of telling the story. Previously, the story was very muddled, but that's been fixed. The new lead in the production, Russell Hines, seems to embody the essence of the Lord Vampire. The dancers are the real backbone to this production. They are the ones that really move the story forward in an interesting way. They are all top-notch performers. Each of them gets highlighted individually, and all of them work well as a group. They have each developed a character that seems to help move the production along well. There is one huge anomaly in this show, and that is the male aerialist... As an aerialist, he is great, but as the later nemesis of the Lord Vampire, he is horrible. He's a caricature and not a character. I think that he heard the show was "campy" and decided he needed to play the character as campy...he doesn't get it. He's a chapter right out of the "Coarse Actor's Handbook." He consistently delivers one of the worst performances ever seen on a Vegas stage. I am really surprised that no one has told him yet. Fortunately, he is only a small part of the show. Because the show shares the space with other productions, the scenery must be limited, and the unit set for the production works fine for the most part. It is in the lighting of the space that causes the problems. The lighting, while often having some interesting angles and color, is always generalized enough to allow us to see the entire set, the entire time. This creates a similarity to every scene that dissipates our interest. Specific lighting and isolation of areas could produce a plethora of different looks for the production. The costumes are erotic, exotic, and exciting. Designers have done a wonderful job a tailoring their skills to this production. Everyone looks great, and the transitions are achieved well. The show is filled with a lot of fun gimmicks---magic, flying, special effects, etc. All of these things have been incorporated into the production well. The talents of each person are utilized, and everyone gets a special spot in the show. "Bite" has done a lot of growing since its opening. I hope that it continues to get some needed direction as the run progresses.