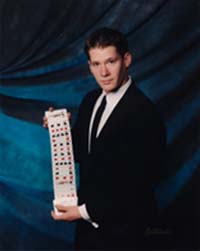 The "Mostly Magic Matinee" is currently playing in the late afternoons at the Bourbon St. Hotel and Casino. It is a small variety show that features magicians for a pleasant diversion for the entire family, and while the host and the featured magician will stay the same, a guest magician will rotate on a weekly basis. The show is a mix of established performers with fresh newcomers. While some of the acts are very well executed and played, the "Mostly Magic Matinee" is doing a good job at also giving exposure to young and upcoming magicians. Some of the acts are a little rough. They lack the polish and panache of seasoned professionals, but there is something charming and wonderful about seeing someone in the building process of their career. Tyas Frantz is the host for the afternoon show and does a good job at keeping things moving while performing some of his own tricks. It is apparent that he is most comfortable when working an illusion. His tricks are fun and executed with a lot of flair. Nick Comis will work as the featured magician in the show. Comis is young and needs a lot more stage time to truly get his act down. His nerves were evident. He broke the rule of, "never let the audience see you sweat." We got nervous for him as he rushed through key point of his routines. The tricks were accomplished…now he just needs time to settle down and focus on his style and presentation. Murry the Magician was the guest magician when I saw the production. Murry’s professionalism was immediately obvious. His routine was performed with the élan and confidence of a master. The feeling and pace of the show completely shifted gears, and the audience sat back and enjoyed a treat. The Bourbon St. Hotel and Casino has a lot of pros and cons going for it, making for a mixed experience. It is located just off the Strip on Flamingo Rd., and now, the new monorail system drops passengers off almost at the front door—it is turning into a prime location. The place, though, does need some upgrading. The showroom itself leaves a lot to be desired. It is a curtained off corner of the casino, the ceiling is too low for the stage, and lighting is only adequate. There have been some improvements to the space, and the seating is close and the space is intimate. The Mostly Magic Matinee is a nice way to spend an afternoon. The quality of the performers is mixed, but I wasn’t disappointed by anyone’s routine. The show ticket price lists for about $20, but there are 2 for 1 coupons everywhere, and there are also dinner/show packages that make this entertainment a good bargain.