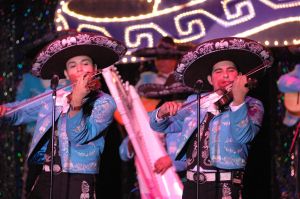 "M"...Mariachi Passion & Tradition, the ultimate mariachi experience, presented by Rodri Entertainment Group, is now playing at a variety of times at the "V" theatre inside the Desert Passage Shops at the Aladdin Resort and Casino. The Latino-themed show delivers performances by 14 stellar musicians and excellent vocalists, who showcase the best of passionate mariachi music. Hispanic in origin, it is a blend of traditional culture, passionate rhythms, and live production involving the entire audience.

The show is a fun 90-minute production that has plenty of audience participation. Within the show is a brief video montage on the great mariachi legends, featuring such singers as Lola Beltran and Jose Alfredo Jimenez, who influenced the art of Mariachi. The cast honors those legends and brings their songs back into live performances.

The "M," mariachi show is bi-lingual with a 22-song set of romantic, fun, and thrilling arrangements. The show features Maureen Sanchez, a nine-year old prodigy, passionately singing a sultry version of "Cucurrucucu Paloma," a love song about the despair, sorrow, and misery of losing a beloved one. Rhonda Garcia does an amazing blend of the American favorite, "At Last," by Etta James, woth the romantic sounds of mariachi.

The show-stopping performance of the production was that of harpist, Juan Cabrera. His abilities with the harp are unbelievable. His performance is almost worth the price of the ticket alone. In the middle of the show, he got a standing ovation.

With the ever-growing Hispanic population in the area, it is nice to see the emerging Latin- based productions. It exposes the general public to an interesting and varied culture. There are times during the production in which you feel lost, because you don’t speak the language. The songs are beautiful, but we fail to gain deeper meaning, because we don’t understand the lyrics.

The V theatre is a good showcase for this production. The space was originally built as a Spanish steakhouse and retains that feeling. The stage sometimes feels a bit crowded, but there is nice technical support.

"M"...Mariachi Passion & Tradition is a good addition to the entertainment scene in Las Vegas. It will be interesting, though, to see if they will be able to draw enough of a crowd in order to survive. The show times are not consistent, and the cost might be a bit much for this new style of "Vegas" entertainment.